← Panama canal transit
On to Galapagos… → 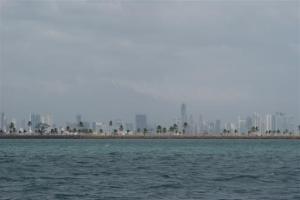 Panama city looking across the causeway from where the boats were.

Panama city was much bigger than we expected and it had several big shopping malls with huge supermarkets.   We stocked up the boat because this was the last time we would see food in such quantity until we get to NZ.  The prices were good so we made several shopping trips filling the boat with essentials. Bill spent time visiting the chandlers to try and buy a new muffler but without luck, BWR will bring one out to Galapagos for us it should last until then.

Carnival came to Panama city and a group of us went into town to watch the parade.  We arrived early and found bags of ‘hole punch droppings’ being sold and everyone was throwing them at each other and us.  We soon bought some bags and joined in, the little pieces stuck to our hot skin and we kept finding them in the boat for days afterwards.  We walked the length of the main road looking at all the sights.  The parade started at 4pm and was very noisy and colourful.  There were lots of people there enjoying the atmosphere.

BWR put on a social programme and we spent 10 days at anchor.

Monday 22nd February we left Panama city, it was 8am and already hot and sunny.  We were off to find a nice anchorage where we could jump in the water and have a swim.  The water at Panama had been very dirty.  We were heading for the Archipelago of Las Perlas.  There wasn’t any wind so we motored for 6 hours to charge the batteries and make some water. 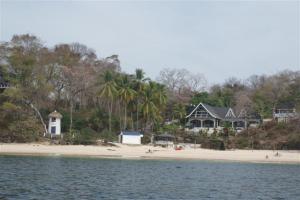 We arrived at an island called Contradora where there were already 4 other BWR yachts.  The crews of Briet and Norsa joined us for a drink that evening.

The next morning we had our swim off the back of the boat, it was wonderful.  We dropped the dinghy into the water and landed on the beach to go and explore the island.  It’s the most developed island in the archipelago with a small runway for light planes and paved roads although there were plenty of potholes.

Sadly a lot of the buildings had fallen into disrepair and this boat on the beach had been abandoned, it was like a ghost town, maybe a sign of the times.

The next day we moved to the anchorage between Chapera and Mogo Mogo, these 2 islands had been the setting for the TV series ‘Survivor’.  We were looking for a beach to put Camomile up on her legs to dry out and scrap her bottom before the Pacific crossing.  Mogo Mogo looked like a possibility. 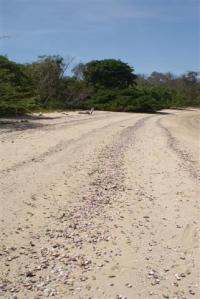 The beautiful beach on Mogo Mogo covered in pink shells

The island is surrounded by shoals and isn’t suitable as a normal anchorage because it’s too shallow.  We took the dinghy over at low tide and it looked ideal.  We surveyed the depth and found a channel deep enough to enter.  We set up our own transits on the beach and went back to Camomile to wait for the tide to come in.

There was a group of rocks sticking out of the water that marked the end of a reef, at low water it looked like it could take a bite out of a yacht.  This was opposite a peninsular at the end of the island.  The channel in between was deep enough for us at high tide.  We already had the ‘legs’ attached to the side of the boat so we motored very slowly towards the beach.

Camomile sitting firmly on the beach

We just touched the bottom and stopped.  Bill quickly wound the legs down in place and attached a line fore and aft from each leg.  We put the dinghy down and Bill took a kedge anchor and dropped it in the water behind us then we tied one of our long Panama warps to a tree on the beach and tied it to the bow … and waited.

Camomile on the beach waiting for the tide to go out

The water slowly dropped exposing the hull.  The copper coat that we had put on before we left had worked very well but there were lots of barnacles attached which needing scraping off.

I set about that while Bill gave the hull a scrub, he also changed the anode and scrapped and polished the propeller.  It didn’t feel like hard work because it was such a beautiful setting.  The island was completely uninhabited and I walked the beach collecting beautiful pink shells and watching the Iguana’s running around while wearing only a hat!

A lovely pair of bottoms!!

It’s impossible to describe what it was like, the sounds and smells and quietness are difficult to convey with just a photo.  That evening we sat on the bathing platform, glass of wine in our hand, watching the tide coming back in.  A ray glided past to see what was going on.  The tide didn’t come in until after dark but all was well.  We lifted for 3 or 4 hours and then sat back down again and stayed in the same position.

The next day we decided to stay longer because it was such a beautiful place.  We went exploring and found an equally beautiful beach on the other side of the island.  There were lots of Iguana’s sitting in the sun and birds nesting in the trees.  It felt like the garden of Eden.  We had been talking to other BWR boats on the VHF who were anchoring between the islands where we had originally been, they said it looked as through Camomile was floating in the air. 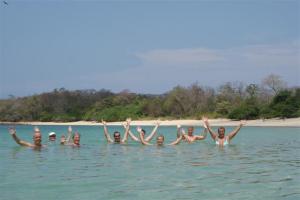 On the third day we were invaded, they all came over in dinghies to see us.  That afternoon when we lifted we gradually slipped off the beach and motored back over to join the others for Mark on Blue Magic’s birthday beach party and back to reality.  Too much reality because the next morning someone logged on early to check their emails and discovered a tsunami warning from Rally control.  Word went round the anchorage and we all weighed anchor and headed out for deep water.  Fortunately nothing came and we went back to anchorage.

We decided to go and see what some of the other islands were like and sailed down the east side of the Isla del Rey and anchored off the village of Esmeralda.

Within minutes two little faces appeared over the aft quarter offering us bananas and papayas, they looked so cute.  We ended up paying US$3 for a big hand of bananas and 2 big papaya and they took our rubbish away.  We’d obviously paid over the odds because they went away smiling.  We got in the dinghy and went ashore.  I took a bag of trinkets and chocolate to give out.  A young man who wanted to show us around the village met us as we approached.  They weren’t as organised as the Kuna’s but they had a nice community.  We were shown around the village.

Their homes were made of concrete with cast iron roofs and everywhere you looked there was washing hanging out.  There was a school, a clinic, a cantina, a military post and a small shop selling very basic food.  As we walked around the village we were treated like celebrities, children surrounded us wanting their photo taken and then wanting to see themselves on the screen on the camera, they were fascinated.  There were children of all ages following us and some were fighting who was going to hold my hand, they were so sweet.

I was surrounded by children

Mothers were bringing their babies out to show me so I had to have a cuddle although one was very wheezy; I’m not sure what the infant mortality rate is.  After staying for an hour and bartering for some pearls we got back in the dinghy and went back to the boat with all the children waving us off.

We continued a little further along the coast to Rio Cacique where we intended anchoring for the night.  We found a dozen or so BWR boats already there.  Rio Cacique, a scenic river full of wildlife, can be explored by dinghy on the flood tide.  At about 4pm, an hour before high tide, we motored to the entrance. 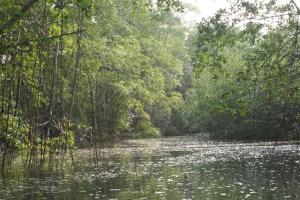 Creepers dangling in the water

We followed the river for a while then Bill turned the engine off and rowed, we let the tide take us as we glided through tall, partly submerged mangroves and rainforest in silence.  We saw several different kinds of birds sitting in the trees and creepers hanging down from the branches like fingers dangling in the water.  There were lots of noises coming out of the rain forest and we saw lots of crabs climbing around the mangrove roots.  Towards the top it was difficult to tell where the river was but we continued rowing among the mangroves and eventually found it again. 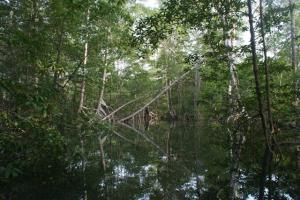 As the tide turned we rowed back marvelling at the wonderful reflections the mangroves made in the calm still water as it gently ebbed away in the fading light.

But time was pressing on and we needed to start heading out into the Pacific for the Galapagos Islands.

Posted on February 28, 2010, in Port posts. Bookmark the permalink. Leave a comment.

← Panama canal transit
On to Galapagos… →