Passage from Fiji to New Zealand

The waiting was over, finally there was a weather window that looked reasonable so I emailed Bob McDavit and requested a voyage plan/forecast. Bob is the local weather guru working for the NZ met office and he provides a wind and wave forecast along with waypoints for the optimum weather route. 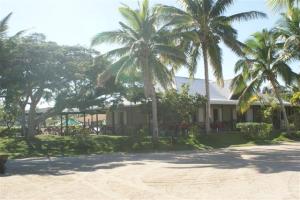 We left Musket Cove and motored to Lautoka to check out of Fiji.  Then we motored down to the entrance to the reef to anchor over night to get a good nights sleep before starting on our passage.

Day 1  First light brought a clear sunny day with very little breeze at the anchorage so we motored towards the passage putting the sails up on the way. As we exited the reef at 06:00 we were treated to a goodbye visit by a pod of Risso’s dolphins. I had put two reefs in the main based on Bob’s report, which promised 23 knots gusting 34, but there was no sign of it yet. I wondered how good this guy was. I didn’t have to wait long to find out because as soon as we cleared the lee of the island we got the full force of a strong trade wind along with 4.5 metre seas. Deeply reefed though we were Camomile felt the beam reach, dropped her starboard gunnels into the water and took off like a rocket. It was fast but not very comfortable and was the first time yet we have actually had to ‘hove to’ just to go to the heads!

Why do I keep doing this, it’s been 4 months since we’ve done any proper sailing and I seem to have lost my sea legs.  I’ve spent the day horizontal on the saloon bunk.  I’ve been up twice, first to go to the loo and I was sick at the same time, second time to cook the dinner.  Fortunately I had prepared and cooked a number of meals before we left so I didn’t have to spend too long in the galley.  I considered just throwing mine over the side and cutting out the middle man but decided to try some.  I took 2 mouthfuls and realised the first plan would have been better!

Day 2 As we romped along through the big seas well forward of our beam we logged our position and speed against Bob’s voyage plan, which was already proving to be very accurate. This was encouraging because it was forecasting for both the wind and sea to drop to more sensible levels. Sure enough, right on time, the wind eased slightly and, some time later, the sea followed it. Even so, it was still hard work and very wet on deck as we topped waves with breaking crests they would swoosh across the deck and even got past the spray hood, dripping down the companion way making it damp down below where there was little ventilation as all the hatches and vents were sealed. I decided to put my dry suit on so that I could nap on deck overnight during Sue’s watch to be ready to react if we took a rogue wave or encountered some other excitement.

It was a long and uncomfortable night but, as the dawn bled into the sky, I eased a couple of turns out of the genoa which, until then had just been showing a tiny scrap.

I feel a bit better today, managed to get some sleep last night and the sea is calming down.  I think my sea legs are returning.  Watched the most beautiful sunrise this morning.

Day 3   As we powered on through the ocean Bob’s  report continued to predict the conditions well, as the wind dropped further I was finally able to shake a reef out of the main.

Getting back into routine now.  James’ birthday today – hope he’s safe in Afghanistan.  Saw a yacht on horizon this evening, the first one since leaving. 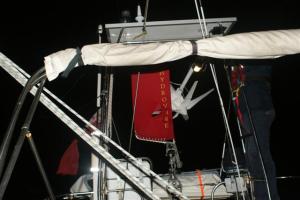 Day 4   Up until now our wind generator nicknamed “Wendy” (when de wind blows) had been able to supply all our power with no need to run the engine to top the batteries up but that was all about to change. At 03:00 she fell backwards off her perch on the aft gantry and still spinning attacked Harry (our Hydrovane wind self steering gear). At a stroke we had lost both our steering and our power supply. Why do these things always happen in the dark of the early hours?  I powered up the electric autopilot and reluctantly woke Sue so she could back me up as I left the cockpit to deal with the mess at the stern.  Wendy weighs in at 15 kilos and the sea was still pitching and rolling us a lot so I decided it was too dangerous to deal with this in the dark. I stabilised the situation by lashing her to the gantry and disengaged the self steering drive.

By the following morning we had dug out our spare wind pilot sail to repair Harry and, very, very carefully I dismantled Wendy from her broken mast and brought her back to the cockpit to stow her down below. In doing I broke one of her blades….. She was going to be a passenger for the rest of this trip!

After we lost Wendy the wind picked up again so the reefs are back in.  The wind is coming from the south east and we are close hauled which means we’re sailing on our ear. The sea is up again and coming over the top all the time, the decks are awash. 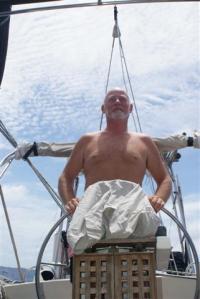 After managing to get the wind generator down safely Bill was disappointed when it broke.  I’ve finally stopped feeling sick so I made some chocolate brownies to cheer him up which wasn’t easy while we’re heeling so badly.

Bill has gone from nearly no clothes ….. 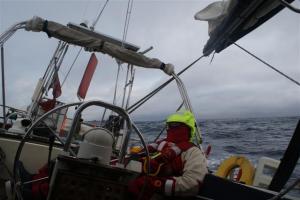 Day 5   Our fast passage continues as we shake out the reefs and keep Camomile surging on at 7-7½kts even though the wind is now 15kts on the beam.

As the wind starts dropping I managed to sleep properly for the first time last night and had a shower this morning.  We passed 17000 miles since leaving the UK today.

Day 6   And the wind backs round to the northeast. That’s on our tail so without our twin headsails in place I rigged a prevented and poled Goosewing to keep us moving but as the wind decreases with the approaching front and no power coming from Wendy it’s not long before I have to fire up the engine and motor overnight under an increasingly damp sky.

Bill has started eating the tins of condensed milk because he’s convinced the NZ customs are going to take them away.  Came across a yacht sailing ahead of us today and discovered it was our Canadian friends on Sedna 1 who were supposed to be on their way to Australia but have decided to go to NZ.  The world is such a small place.  We passed 30ºsouth today and it’s starting to get cold, I’ve put the duvet back on the bed after nearly a year of sleeping with just a sheet.  This afternoon while Bill and I were talking I looked over his shoulder to see a whale swimming by not 6ft from the boat and waving his fin!!  It was truly a Monty Python moment

Day 7  Well Bob’s prediction is finally failing as the forecast westerly turns out to be a south easter  – almost on the nose. With reefed sails we thump through the squalls but have to run the engine to keep us on track. Within an hour or so our engine alarm sounds to warn of overheating. I shut her down and check the waterflow to find that we are heeled so far over that the raw water intake, placed starboard of the keel is sucking in air. No option now, we must bear away and sail as close hauled as possible, not comfortable but needs must.

Full foullies on today with long sleeves and socks, it’s turned so cold, we’re just not used to this.  We’re gradually using up any food the NZ customs are likely to take away.  I used the last eggs today and my last tin of M&S chunky chicken.  I won’t be able to eat the last of the honey, which is an absolute no-no in NZ.  You can just picture the scene; SAS in full combat with guns pointed ‘Put the honey on the pontoon and step away from the jar’. So it went over the side!

Day 8   The southerly is still pushing us east. It’s true then, you really don’t need to worry how much westing you get in on your way to New Zealand, you can always use it on your final approach. Tacking to get towards land is proving very slow as the sea has a short chop.  Motoring made even less progress at first but as the wind dropped we picked up speed towards the Bay of Islands

I spotted land at 8.00 this morning while Bill was sleeping.  One little hilltop peaked out of the morning mist, New Zealand at last.  The wind was still coming from the wrong direction and thankfully Bill took the sails in and we motored the last bit.  Bill raised our NZ courtesy flag along with the yellow ‘Q’ flag ready for the customs clearance.  The Bay of Islands looked beautiful and green after hot and dry Fiji.  The water was a serene green.  It took the rest of the day to round the headland and motor down the channel to Opua.

Camomile on the Q dock

We called the customs to announce our arrival at 17.30.

Two very nice customs officers came on board to complete our paper work.  Fortunately the only things they took away were some tomatoes that I was going to eat for my lunch but didn’t, some white beans that they thought might sprout, the rubbish bin and the contents of the vacuum cleaner.  They didn’t seem interested in any thing in tins or our over the limit but declared alchohol.

So we made it to New Zealand.