← Our week in Nuku’alofa including my Birthday
The Eastern Ha’apai group, Tonga →

The Western Hapai group in Tonga 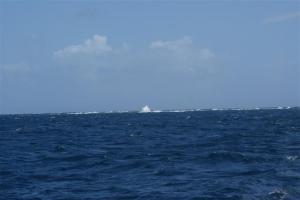 Waves breaking on the reef as we left

We left Big Mama’s on Tuesday 10th May but the wind was too strong to sail.  We motored around to the other side of the island next to the entrance to the reef ready to leave when the wind dropped.  We managed to get away at 5pm on the Wednesday.  We couldn’t leave it any later or we wouldn’t have been able to see the reef, it’s dark here by 6pm.  We motored over the edge of the shelf of the land into the deep sea, sails up, engine off – we were going to fast.   We only needed to sail at 4.5 kts so we could arrive in the daylight but the wind pushed us along at 6kts+.  We hove-to for 3 hours at 4am to wait for the sun to come up before we continued on into the reefs.

This is why we don't trust the chartplotter!

Our position on 12th May

This photo shows why we can’t trust the chart plotter.  The green area is reef around the island, the red cross is the waypoint we were using to find a spot to anchor, the boat in the middle of the island is our position after we had ‘eye-balled’ our way in past the ‘boomies’ or coral heads. The island was about half a mile different from where it was supposed to be. 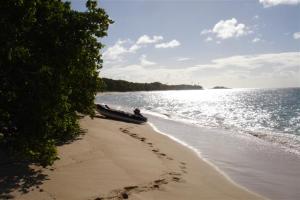 We were anchored next to an island called Nomuka Iki, it was about a mile long and less than a mile wide.  The island was deserted and we had it to ourselves.  We walked along the beautiful beach leaving only our footprints.  The water was beautifully clear and we swam and snorkelled around the boomies.

Our position on 13th May

Friday the 13thand we were out sailing, hopefully all will be ok.  We started off sailing but the wind gradually died and the motor was soon on.  We headed for an island called Oua, it’s surrounded by a lagoon, which is encircled by reefs.  Despite 2 of the 4 marker buoys being missing we managed to find the entrance and found a nice spot to anchor.

The children on Oua island

Up to this point we hadn’t been to a Tongan village so we dropped the dinghy into the water and motored over to the jetty.  I had a bag full of lollipops and each time we saw a child we gave them one.  Word spread quickly and we became like Pied Piper with a string of children following us wanting to practise their English and their hand stands.  The children were keen to show us their school.  There was only one room but it was very colourful although it lacked the very basic things our school children take for granted.  The Tongan people appear to be very poor.  The adults in the village were very quiet although they smiled politely as we passed.   The children followed us back to the jetty, doing handstands all the way.  They have a wonderful free life, roaming their island freely.  During the evening the adults passed us on their way out of the reef to fish, they are happy to wave but don’t come to chat like the Fijians did last year.

The chartplotter can't be relied upon again

We left the next morning crossing a clear open channel that wasn’t on the chartpoltter, again it can’t be relied upon.  A pod of porpoises came to escort us out of the reef; they are smaller than dolphins but jump higher out of the water – except when you get the camera out! 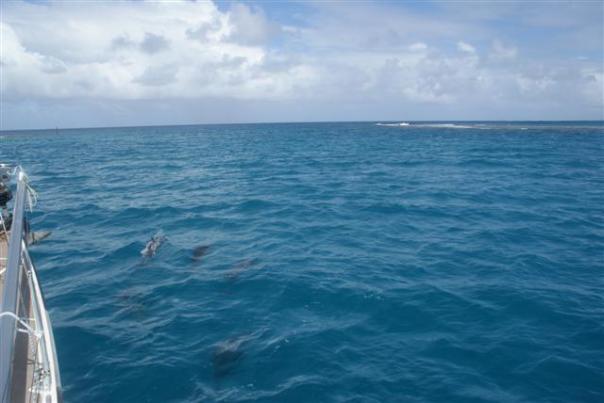 The porpoises escorted us through the reef

Beautiful rainbow but it means rain is out there

The next island was only a couple of hours away so we motored to it.  We had a beautiful rainbow off our starboard side while we were travelling along but that meant there was rain around.

The main street on Ha'afeva island

Our position on 14th May

Ha’afeva has a beautiful lagoon anchorage on the west side protected by its surrounding reef.  It had an easy entrance with a marker beacon – that was a first.  We anchored near the jetty that had been partially washed away by a recent tsunami; they have regular storm surges in this area in the cyclone season.  The village is on the east side, which is a pleasant walk from the anchorage – we didn’t notice the mossies until later.  The main street was fairly well kept although there were pigs roaming around freely.  We found a little shop and bought some eggs and bread.  We walked around for a while chatting to the children, the lollipops were popular again. 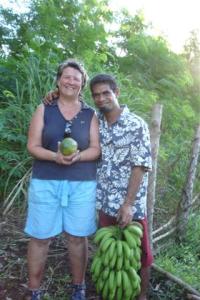 Peter with bananas from his plantation

On our way back to the boat we met Peter who owned a plantation.  He offered us some fruit and disappeared into the bush to get it – emerging with half the tree!  There were so many bananas on the stalk that we said we wouldn’t be able to eat them but he insisted we take them.  We also had some fresh lemons and a papaya.  He carried the bananas back to the jetty for us which we put in the dinghy and took them back to the boat, he wouldn’t take any money so we gave him some cigarettes, a couple of beers and a t-shirt which he seemed happy with.  We sat and watched the sun go down over the volcanic island of Kao 25 miles away. 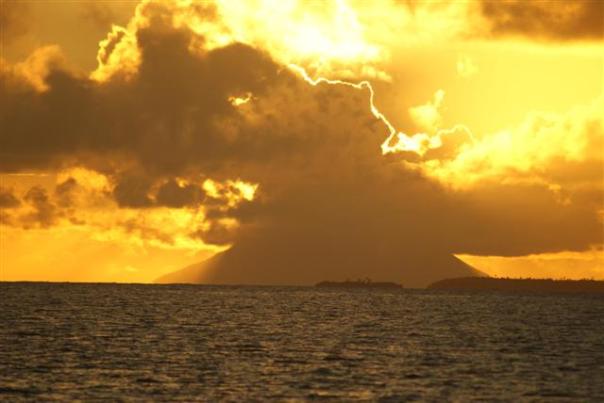 The tip of Kao 25 miles away

← Our week in Nuku’alofa including my Birthday
The Eastern Ha’apai group, Tonga →