Our first week in Opua, NZ

Our first week here has been very busy.  We were checked in by customs fairly quickly on the Monday but didn’t go ashore.  We had a few chats on the pontoon with fellow sailors but then went to bed.

On Tuesday Bill hosed down the cockpit and the cushions, which were all covered in salt and we put the winter cockpit cover up.  Bill was going to hose the decks down but it started raining so the rain did the job for us.  We went for a wander familiarising ourselves with Opua.  It’s so nice to be able to walk into a chandler and buy what we need for the boat. 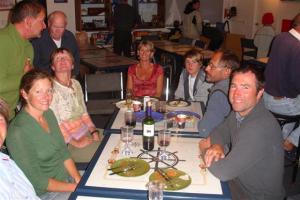 The last rally event was in the evening, a ‘Hi and Bye’ party.  John borrowed the local yacht club for a Pot luck supper.  We all took a dish of food to be shared; it was amazing the variety of dishes that turned up. It was sad saying goodbye to many of the friends we’ve made in the islands but we’ll probably see some of them again further down the country.

On the Wednesday we had a lovely chat with James who was celebrating his 28th birthday with Gemma in Scotland.  Later that day we were lent a car by David on SeaEsta (the kiwis are so generous like that) so we went into Keri Keri to sort out our Vodafone dongle so we can have internet access, buy a top up for our NZ phone, resurrect the NZ bank account and do some food shopping.  It was wonderful to walk into a supermarket and buy all the things that were unavailable in the islands.  I stocked up on veggies, fruit, whole grain bread, fresh milk and bacon, to name but a few, and of course strawberries and sweeties.  I even bought a magazine.  Quite a few boats left later that day but we met up with a dozen or so of the cruisers left in the Yacht club for a meal.

Thursday the sun was out so I hit the launderette.  All the lockers were stuffed with washing because there weren’t any launderettes in Noumea plus we had a leak in the forepeak and seawater got into Bill’s t-shirt locker during the passage soaking everything so they needed rewashing.  Bill spent the day removing 3 stanchions and the Hydrovane, the foresail has gone off to the sail makers for repair and also the dinghy has gone away to be re-glued.

Friday Bill put the new stanchions on and re-assembled the Hydrovane after having had the shaft straightened.  More boats left today but we enjoyed Happy Hour in the YC meeting new cruisers that have come down from the islands.  The good thing about Opua is that it’s a terrific meeting place and we’ve discovered cruisers here that we haven’t seen for ages.  Each day new boats turn up on the quarantine dock and we discover that we’ve met some of them before but it’s always hard to remember where.

Saturday was Gloria from the American boat Pincoya’s 60th birthday.  We first met Gloria and Gene in Opua last year and we’ve been with them on and off through the islands so it was good to share in her big day.  They invited quite a few people to cocktails and nibbles on Pincoya followed by a barbeque on the pontoon.  Kerrie from Forteleza made some delicious puddings and I made her a chocolate birthday cake.  As it was the 5th November we all wandered down to the YC to watch the fireworks, yes, they have Guy Fawkes Night in NZ. 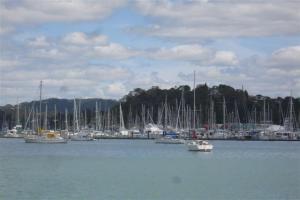 Sunday was sad because David on SeaEsta left with little Eva but I’m sure we’ll see them again.  We had a lazy morning but later Bob and Elaine from the British boat Pipistrelle came for tea – more excuses for chatting!

Posted on November 6, 2011, in Port posts. Bookmark the permalink. Leave a comment.