← Of fridges and Auckland views from a volcanic rim
Great Mercury →

Around the Coromandel Peninsular

As we left Rangitoto island turning Camomile south, we passed Motuihe island where we had enjoyed our Christmas celebrations then continued East through the Tamaki strait south of Waiheke Island.  A lovely sail in a brisk northerly across the southeast Hauraki gulf took us into Te Kouma harbour. 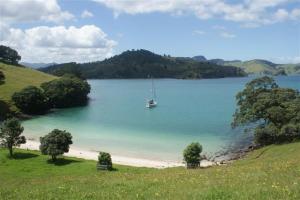 Our position on 15th January

We picked West bay to anchor because it would shelter us from the north winds and luckily there was no one else there.  Te Kouma is arguably the most picturesque harbour on the Western Coromandel and the white sandy beach of West bay was stunning.  Bill dropped the dinghy and we went ashore to explore. 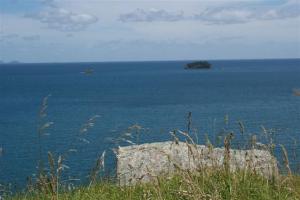 The cow and calf islands

The bay was surrounded by hills, which we climbed to gain amazing views of Camomile and the little islands we had just passed including the Cow and the smaller Calf islands.

We also had a brilliant view up the neighbouring Coromandel harbour. 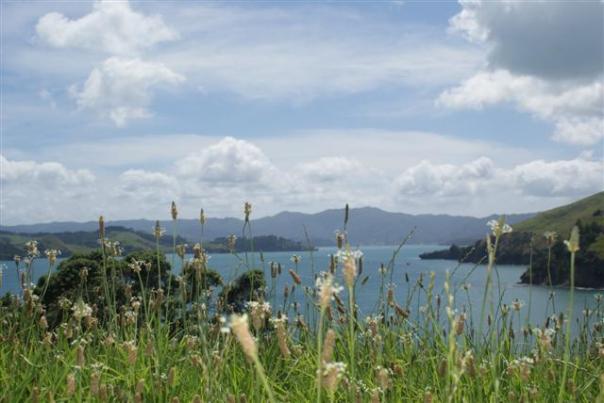 Up to this point I hadn’t swam in the sea in NZ.  Bill has snorkelled over the anchor a few times but I’ve managed to avoid it because the sea hasn’t been warm enough for me.  The next morning as the sea temperature has now risen to 22C and the sun was out I decided to give it a try.  It felt cold when I first got in but I managed to swim to the beach then swam back again.  Bill and I swam to the beach together and sunbathed for a while before swimming back.  The summer hasn’t been very good in NZ this year so hopefully this is the start of the good weather everyone has been waiting for.

Our position on 17th January

We motored the 6 miles around to Coromandel harbour with the main town of the peninsular, also called Coromandel, a short dinghy ride up the river at high tide.  A lot of the townships in NZ are one street towns with a small selection of shops and cafes, Coromandel wasn’t an exception.  We walked up one side and down the other as we selected somewhere nice to have lunch.  I wanted a salad and Bill wanted a burger, fortunately we found one of the cafes serving just that. 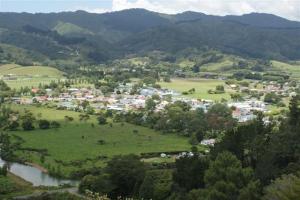 A view over Coromandel town

After lunch we walked the Harrey track.  The area was regenerating bush with planted Kauri trees.  Part of the area has been dedicated to Christchurch with a plague with names of the poor people who had perished in the recent earthquakes, a touching sight.  A sidetrack led to a Maori ‘Pa’ site with spectacular views over the town and the anchorage.  The track continued inland up hill and down dale, including lots of steps up and down inbetween, for a couple of hours finishing at the top of the town after which we walked back down through the town to the dinghy and back to the boat for a well earned cup of tea.  Our friends Stefan and Silva on Meditteraneo from the ICA rally came into the anchorage, it was nice to see a familiar face.  They came over for drinks that evening and we had a great time catching up.  We left Coromandel harbour on Friday but the wind had dropped so we anchored overnight off Waimate island for favourable winds promised the next day. 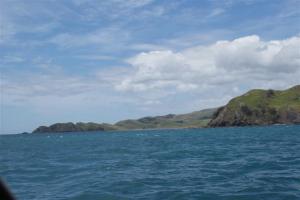 Sailing up the western Coromandel

On Saturday although the wind was light it was coming from our aft quarter, which would give us a nice broad reach.  We left the anchorage just after 9.00.  The main sail was raised straight away while Bill busied himself getting the cruising chute out, commonly called ‘The Green Thing’. After deploying it and turning the engine off the speed dropped to 3kts but it was a beautiful day and we weren’t in a hurry. We gently sailed north towards Cape Colville, a bit of a notorious corner but as the wind was light we assumed it would be ok.  Second rule of boating never assume a passage is going to be easy (first rule of boating – pointy end forward!). 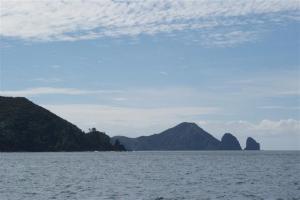 As we approached the cape we put the ‘green thing’ away since the wind picked up.  The chart shows over falls around the headland that usually means confused seas.  The wind was still coming from behind but the tide turned against us resulting in wind against tide and caused the sea to become choppy.  We motored for a half hour or so to get through it, thankful that the wind wasn’t very strong.  I wouldn’t like to make the journey in strong headwinds or higher seas. Once on the other side the sea calmed down and all was wonderful again.  We anchored in Port Charles just after 17.00 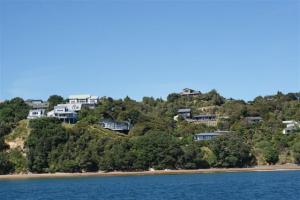 Port Charles looked like it might be interesting but there was a swell coming into the bay.  The next day we decided not to attempt to land the dinghy but moved on to the next bay called Waikawau bay.  We dropped our anchor in the little bay next door called, appropriately, Little Bay.  Unfortunately the swell followed us, along with some rain, so we stayed on board for the third day running.  Monday morning dawned with blue skies and sun but also, more importantly, the swell had dropped.  The dinghy was lowered and we went ashore to explore.  The hills surrounding the bay were covered in bachs (NZ holiday homes). 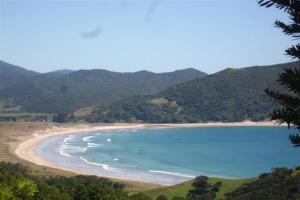 We walked up in between them and followed the road out into the country.  There were amazing views of the neighbouring bay from the top.  When we returned it was such a beautiful day that we sunbathed on the beach.  Any one would think we were on holiday!!

Posted on January 22, 2012, in Port posts. Bookmark the permalink. Leave a comment.

← Of fridges and Auckland views from a volcanic rim
Great Mercury →