We weighed anchor at 10.00 the next morning and prepared to leave the reef with Forteleza (NZ) and Toucan (Irish). The engine has been acting up recently and just as we were motoring towards the entrance it started again. As you know I don’t do technical but Bill said the raw cooling water wasn’t getting through the engine properly, which means the engine could overheat. We turned back from the entrance while Bill manually fed water into the strainer to get the suction going on the water pump. After about half an hour of working on it, while I took the boat round in circles, he was happy for us to go back to the entrance and leave the reef. 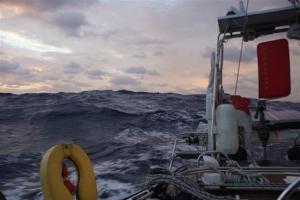 We had 365 miles to go to Suva – a Biscay crossing roughly and rough was the right word because the wind was still blowing 20 – 25 kts outside the reef with 3 – 4 metre seas. Fortunately it was coming from behind us so it wasn’t too bad. We still had 3 reefs in the main and Bill controlled the speed by winching the Genoa in or out. The Hydrovane was having trouble steering when we surfed down the waves so we had the autohelm on as well. Bill also had to hand steer. We reached 9.3 kts once as we surfed down one of the waves and I was doing a very good impression of a meercat just popping up now and again to see if the seas were dropping. I kept Bill fed and watered.

Neither of us slept very much last night. Bill chose to sleep in the cockpit for a couple of hours while I kept watch because he didn’t want to go too far away from the wheel while the sea was still rough. I laid down on the saloon berth but it’s difficult sleeping with the boat lurching from wave to wave. By 2am the wind went round to the east, which made the motion a bit better, and Bill went below to try and get a bit more sleep. I’m still doing my net each morning and we have Forteleza just behind us and Toucan is to our starboard. Norsa were a hundred or so miles behind us and chose not to stop at Minerva so now they are a little way ahead of us but the wind has pushed them off course and they are still quite a way east of the rhumb line. We’ve crossed back over the meridian line and during the afternoon crossed 20 degree south, which means we are back in the tropics. When we left NZ we had 3 layers on but each day we are able to leave more of them off. It’s now starting to get warm enough to sail in shorts and t-shirts. During the day the wind dropped to F5 and the sea started to moderate. As much as I love New Zealand I’m really not doing this passage again.

We had a better nights sleep and this morning we shook the 3rd reef out of the main and let out all of the genny. Later we shook out the other 2 reefs and were sailing really well in a nice F4 – why couldn’t the whole trip have been like this? At 11.30 I spotted land; oh no it’s the island of Ono!! The air temperature is 28C and the sea is 26.9C, oh yes!!
We continued sailing right up to the reef outside Suva before taking down the sails to pass through the entrance at 20.40 and then carefully making our way in the dark to the Royal Suva Yacht club to drop our anchor at 21.00. Norsa had arrived a couple of hours before us; Toucan came in about half an hour after us followed by Forteleza an hour later. All my little ducklings safely in.

Posted on May 7, 2012, in Uncategorized. Bookmark the permalink. 1 Comment.