← Minerva reef to Suva, Fiji
Inside the Astrolabe reef, Kadavu → 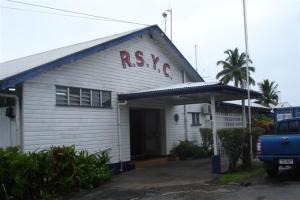 After a good nights sleep I conferred with the other boats and we agreed I would start calling the RSYC at 8.00 to arrange for the customs to come and clear us into the country.  Fiji is the worst country we have come across for bureaucracy.  I’m sure Indonesia will rival it but at the moment Fiji is even worse than Panama. 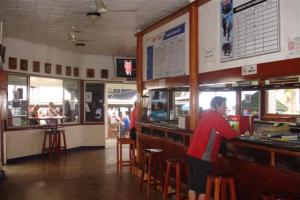 Consequently it took the RSYC quite a while to arrange for the various government bodies to come and clear us in.  At about 11.00 a launch finally turned up with 3 officials bringing the necessary paperwork to each of the 4 boats then they came back to us and started the process.  There was a representative from the customs, immigration and quarantine (practique) all very nice people but each with forms to fill in and money requested. After about an hour and F$262.50 (about £90) they finished with us and continued onto Norsa but half way through announced they were stopping for lunch and would be back in the afternoon!  We just have to smile sweetly and accept it or else they could make life difficult. 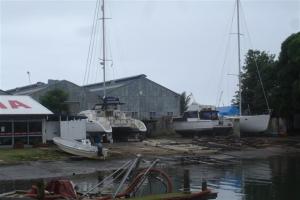 The catamaran Troutbridge up on the hard

Finally we were all cleared in and able to go ashore.  RSYC was built in the sixties and still looks like it although the people are very friendly.  It has a secure dinghy pontoon, fuel and water, a little restaurant and a bar.  We had a long chat to Peter off of the catamaran called Troutbridge.  Unfortunately he hit the reef at the entrance this time last year and has spent the last year trying to salvage it; not sure if he’ll do it, she looked in a bad way still and her engines are sitting in a Fijian workshop some where in pieces.  In the evening we sat down for dinner with Norman & Sara in the little air-conditioned restaurant, a welcome relief from the 34C. 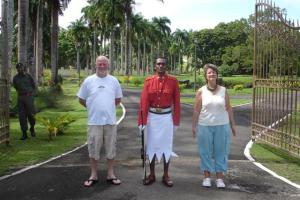 The next day six of us got into 2 taxis to go to the Ministry of Fijian Affairs to get our cruising permits, the final piece of paper to make us legal in the country.  Amazingly it was free! The ministry was next door to the Presidential palace and we all had to have our photos taken with guard in his smart uniform.  The poor guy looked really hot. 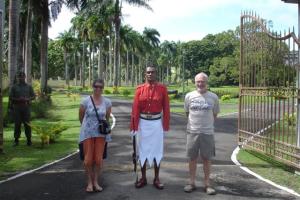 Norman and Sara from Norsa helped.

We walked back into the town to sort out sim cards for phones and internet dongles.  Technology has moved on in Fiji over the last year and dongles were available quite cheaply but we’ve since discovered the signal still isn’t strong enough to upload photos and large documents onto the website in many of the islands so I’ll still have to  send blogs by the SSB radio and I’ll add the photos when we get a better signal.  We headed back to the yacht club and ate in the restaurant again in the evening with Kerre and Tony of Forteleza and Connor and Marian of Toucan, joining Norman and Sara and Bill and I. 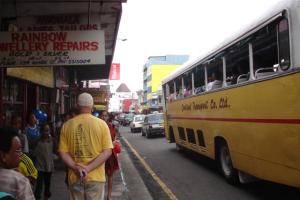 Wandering the streets of Suva

On Thursday Bill and I went into town again for a wander.  There’s two sides to Suva, The old part with it’s little shops and emporiums full of tat standing side by side with the big modern shopping mall with it’s bright lights and smart shops. 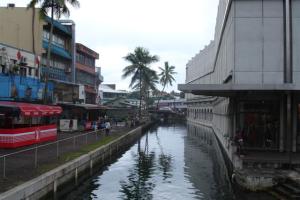 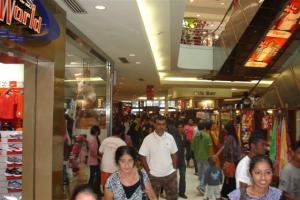 Inside the shopping mall 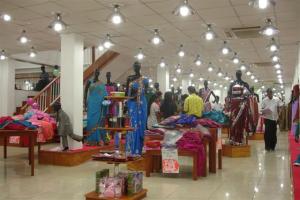 There’s a strong Indian influence in Suva.  There are lots of Fijian Indians restaurants here but we decided to play safe and have a McDs for lunch, well it did have free internet. 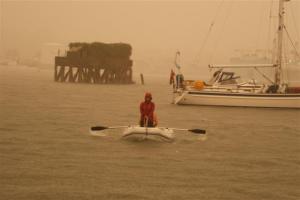 Norman and Sara joining us for a drink

We got back to the RSYC just as it started to rain.  We waited for what we thought was a lull in the rain but we mistimed it.  Half way out to the anchorage the heavens opened and it POURED.  Tropical rain maybe warm but it soaks you in minutes.  We arrived back to the boat soaked to the skin.  Later in the evening we assumed no one would want to come to our planned drinks evening but this is Norman and Sara on their way. 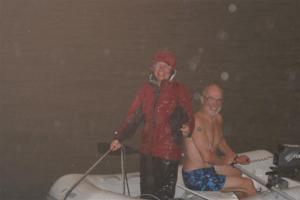 Norman in his swimmers

Norman decided it was easier to come in his swimmers and change once he arrived; nothing keeps Norman away from a drink!! 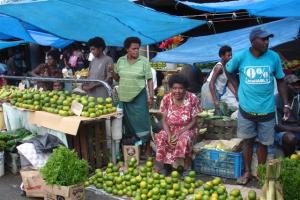 Oranges for sale in the market

On Friday Sara, Marian and I decided to have a girls day while the men did boat ‘stuff’.  First we went to the market to stock up on fruit and veggies because it’s difficult to buy things in the islands.   Although green these oranges were very juicy. 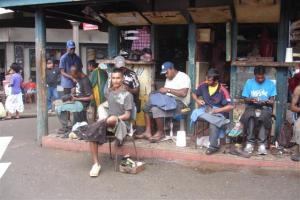 A row of cobblers!

It’s also possible to get your shoes mended by these boys.

We went into the mall and had lunch then Sara and I had our hair cut.  Mines a bit short but it will be cooler.

We took our boat papers to customs and waited an hour to clear out of Suva and obtain clearance for Savu Savu, our next main port in Fiji.  Despite there being 6 people in the office only one lady could process us and she was out but eventually she turned up and we got our clearance.

Saturday we relaxed on the boats ready for the sail the next day although we went ashore for one last drink in the yacht club.

← Minerva reef to Suva, Fiji
Inside the Astrolabe reef, Kadavu →