Inside the Astrolabe reef, Kadavu

Anchored off Yaukuvelevu Island in the Astrolabe reef

Camomile, Norsa and Forteleza left Suva at 06.00 on Sunday 13th May for a fairly racy sail into a south easterly down to Kadavu through rough seas.  After a gruelling 7 hour beat we arrived at the Herald passage, entry into the Astrolabe reef. 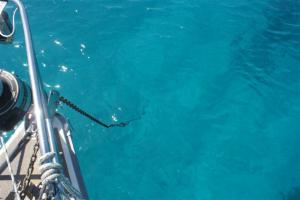 The anchor chain disappearing into the beautiful turquoise water

Our position 13th May

Anchored off Yaukuvelevu Island in the Astrolabe reef.

The water’s a beautiful turquoise blue and so clear we can see the anchor and it’s chain on the bottom.  The snorkelling here is fantastic with lots of different coloured coral with striking coloured tropical fish.

The island has a half built resort on it and the workman were a bit noisy so the next day we left to sail south around the island of Ono.  We got to the anchorage and could see a lovely sandy patch close in and started to motor towards it.  I was on the bow on coral spotting watch.  I could see the coral on the bottom and called back to Bill that we were over coral who was watching the depth gauge.  I told him to go right because there was a patch in front of us that looked shallow but there wasn’t time to turn and we felt the keel glance along the coral as we slid over it.  Fortunately it was just a small coral head and we came off it quickly but it was quite scary so we turned around and anchored further out.

Our position on 14th May 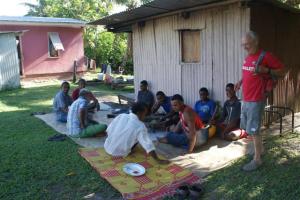 Norman decided to try the cava with some of the villagers.

While walking on the beach the next day we met some locals from the village in the next bay who invited us all to come over and see their village that afternoon.  Six of us arrived in three dinghies on the beach later that day.  In Fiji when you visit a village it’s customary to perform ‘sevu sevu’ which means a bunch of kava is presented to the chief.  Kava is the dried root of the pepper plant that can be bought in presentation bundles from the local markets.  Once ground into a powder and mixed with water it forms a non-alcoholic, mildly narcotic drink which looks and tastes like dishwater!  Once we landed on the beach we asked to be taken to the chief to perform our sevu sevu.  We were shown to an old hut with a wizened but friendly old man sitting on the floor inside.  The only furniture in the room was a bed and an old dining chair but he preferred to sit on the floor.  Bill presented some cava on behalf of us all and it was received with a little Fijian prayer and some chanting, each bit followed by three claps which we all copied.  Norman decided to try the cava with some of the villagers.

The school hiden amongst the palm trees

After sevu sevu we were invited to look around the village and take photos if we wanted.    The villagers encouraged us to chat to everyone.  We all wandered up to the little school on the hill to take a look at the children.

One of four classrooms in the school

The schools here look very sparse compared to the bright classrooms our children are used to.  Although all the children had a uniform on some of them were third or fourth hand and were looking very worn, also note none of them have shoes on.  When our boys were young they were often encouraged to fill a shoebox for less fortunate children than themselves.  We’ve done it many times, as I’m sure some of you will have done. 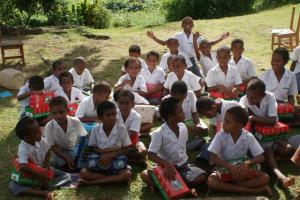 The children were presented with a charity box of goodies

So imagine our delight when we arrived at the school to see some of these boxes being handed out.  The boxes had come from NZ and had obviously been intended for Christmas because there were hand drawn pictures and letters and Christmas cards from the children who had assembled them.  It was wonderful to see real children receive them, even though they were 6 months late.  When asked why they had taken so long the teacher said they had been held up in customs for a long time.  Why does bureaucracy have to affect the children? 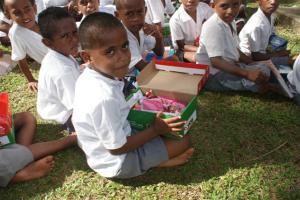 This little girl was pleased with her box

The boxes were categorised for either a boy or girl (there are girls in this group but it’s difficult to tell because they have such short hair and the boys wear a sula instead of trousers) and there were also 3 different age groups so as each child opened their box it was full of things relevant to them and the smiles on their faces brought tears to our eyes.  Some of them contained woolly socks or hats which probably won’t get worn but most of them had some sort of reading material, coloured pens and pencils and, more importantly, little toys which many of the island children simply don’t have. 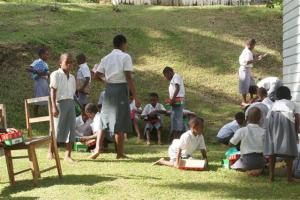 What amazed us was that the children received them very gratefully and politely, there wasn’t any pushing and shoving, they just waited until they were given a box. Once handed out the children took their boxes into little groups and investigated what they had.  We saw no arguments, no swapping and no ‘his is better than mine’ comments they were just so pleased for each other; it was truly heart warming. 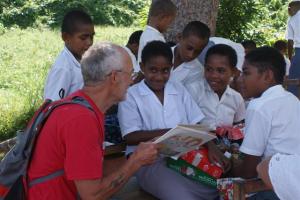 Norman read them a story

Norman started reading one of them a story and was soon surrounded. When we get home these boxes are going to be my charity but they need some form of tracking until they reach their destination. 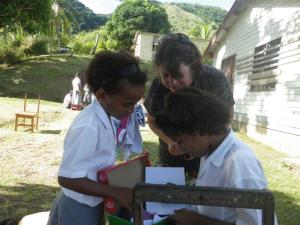 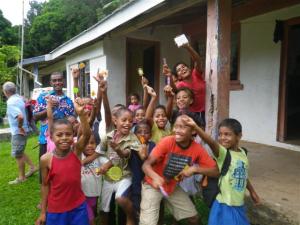 Our position on 17th May

The wind shifted again and so we sailed back up to the north of Ono and anchored in front of a village called Naqara.  We went ashore to do sevu sevu and the six of us were invited to a meal the following evening.  Joe, one of the elders of the village, met Norman and Sara, and Kerre and Tony, and Bill and I on the beach.  First he showed us the school.  This part of the island is more isolated without any tracks across the land so the school is a boarding school.

The children sang to us in the dining room

Children as young as 7 were living in fairly poor conditions Monday to Thursday and then they go home by boat on Friday afternoon.  They all seemed to be coping ok and the older ones helped to look after the younger ones because there wasn’t any kind of housemother scheme.  There were 4 showers shared between about 50 children; outside of course.  It was all very basic.  Lollipops were distributed to a small group that followed us around and in return they sang to us in their dining room.

The Fijian meal in Joe’s house

We went back to Joe’s house where we were all given beautiful leis to wear that had been made by the ladies of the village who had also specially prepared a lovely meal for us.  It was served on plates on a tablecloth spread out on a coconut mat on the floor.  We all sat on the floor around the mat, my knees are not good for sitting cross-legged but we made ourselves comfortable.  We didn’t recognise any thing but Joe explained what it all was.  First we had the most beautiful coconut crabmeat served in their own shells in coconut milk, there was also aubergines cooked in garlic and tomatoes, fish wrapped in taro leaves, cassava, which is a root vegetable similar to sweet potato that had been prepared in a variety of ways, to name just some of what was on offer.  Although it was a bit bland because they don’t use herbs or salt it was interesting to try some traditional Fijian food and mostly very nice.  Although they offered us water to drink we politely declined and chose to drink our own.  I’m sure it would have been ok but we thought we ought not to risk drinking it. 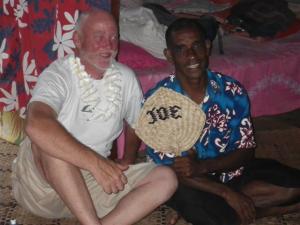 They wouldn’t allow us to pay them for what we had eaten but asked for a donation to their new generator for their church instead, which we were happy to do.  After the meal we were joined outside by the chief, he thanked us for coming and for our donations.  Bill thanked him and the villagers for their hospitality.  Joe and some of the others walked us down to the beach and helped us launch the dinghies.  They waved us off with happy smiling faces.  We just love this country.