I haven’t had a chance to write anything on the website for ages so here is a summary of June. (This has taken 2 days on a wifi hotspot to just post!) 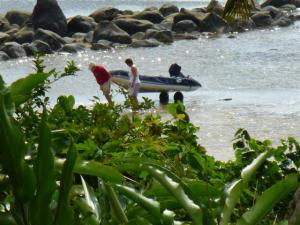 Trying to get the dinghy ashore

We left Vanua Balavu on 1st June and headed for Taveuni which is an island on the eastern side of Fiji.  There were some  nice restaurants where you could take the dinghy to.  Unfortunately on this day it was low tide and we struggled to get it ashore.

The next day Sara and I went ashore to try and get some much needed fresh veggies.  We got a few bits but also met a really nice lady who organised for someone to take us to visit the Bouma national park and waterfall, which was where the last Blue lagoon film was shot.

Sara and I walking along the jungle path

The next morning we went ashore to meet the car and after a 2 hour drive we arrived at the national park.  We had a lovely walk to the waterfall, which took another 2 hours.

The ladies from the village doing their washing in the stream

The path took us through a village and these ladies were using the water from one of the streams to do their washing.  I wished I’d brought mine so I could have joined them.

The top of the river led to the inner pool with the waterfall in it.

We reached the waterfall only to discover we had to wade and swim to the inner pool to see it, lucky we had brought our swimmers.  We got in and discovered the water was really cold, although we were grateful for the cool down. 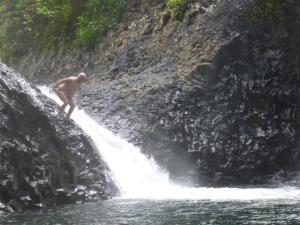 Bill jumping into a smaller waterfall

We had the pool to ourselves and Bill climbed the rocks several times to jump into this smaller waterfall. We tried to swim under the main fall but the force was too strong, it was like being hit by a hammer.  We dried off and ate our picnic and walked back to the park entrance where our driver was waiting patiently in the car. 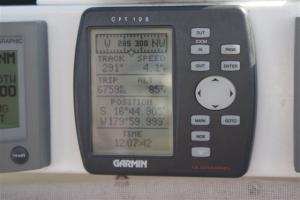 The GPS changed from west …….

On 6th June we motored south.  The island of Taveuni is the only place in the world that the 180 degree meridian line crosses.  It’s possible to stand with one foot either side of the ‘line’.  We really wanted to go ashore and do that but the wind picked up and we couldn’t anchor.

Instead we watched the GPS change from west to east.  We’ve been crossing the Meridian line back and forth over the last year or two but this is the last time.  As the Red sea is now a no go area the next time we see the GPS change back from east to west will probably be off the coast of South Africa.

We continued down to Viani bay on the south east corner of the Northern island of Fiji.  We met up with Aurora B an English boat we met in NZ at the end of 2010.  Camomile and Norsa were invited on board for drinks.  The next day we snorkeled the Rainbow reef and can honestly say we have never seen such a beautiful reef with so many fish swimming around it.  We drifted over the reef with the current and the scenery below us was spectacular.

The 8th June saw us motoring without a breathe of wind to Savu Savu.  I took this unusual photo on the way.  It’s me looking into the calm water over our bow. The water was like a millpond.

We arrived in Savu Savu on the 8th June (Happy Birthday Thomas) and caught up with lots of boats we had met in NZ.  We feel we have come full circle in the South Pacific because Savu Savu is where we checked into Fiji with the Blue water rally 2 years ago and having crossed the meridian line for the last time we are now on our way home.

We stayed in Savu Savu over a week with Norsa enjoying a few nice meals together and restocking the boat after our stay in the outer islands.

We left on Saturday 16th on the inner passage between the reefs south of the North island, across Bligh water, then north of the South island, with Norsa following us.

Tuesday 19th we arrived at Vuda point marina ready to lift Camomile.  Bill wanted to repair some patches on the Cuprotect and also we wanted to check the keel after hitting the reef in Kadavu.  We lifted Camomile at Vuda point two years ago and found them very reliable but we were still a bit apprehensive.

The damage to the keel wasn’t that bad, just a bit of the antifoul scrapped off.

Boat maintenance in the sun

We were put next to some beautiful palm trees for a few days while Bill and Norma worked on the boat.  Sara and I went into town to sort out the Australian visas and more shopping in Lautoka.  Vuda Point is next to First Landing resort which has a fantastic restaurant.  We had some nice meals while we were there.  It was too hot to cook on board while we were on the side – that’s my excuse any way.

Camomile among the Superyachts

We went back into the water on 22nd and on Saturday 23rd we motored across to Port Denerau where we motored among the superyachts.  Port Denerau is only a short drive to the airport where we eagarly waited for our son James to arrive on Sunday 24th.

If I can get the wifi to stay online I can post James in Figi blog.