Our mini break in Ubud

18th September we left Camomile in the safe hands of Medana bay marina and headed to the ferry port in Lombok for the fastcat to Padang Bai on Bali.  It was a lumpy crossing which took almost 2 hours.  The price included transfer to the hotel so we were loaded into buses and whisked off to Ubud, a further hour and a half down the road.  We arrived at the Casa Ganesha a friendly little hotel on the edge of town, mid afternoon.  It only had 48 rooms but each one had air-conditioning, hot showers and a really big bed – heaven!

There was a nice little pool but I don’t think we’ll have time to use it.  We walked up into the centre of the town for a nice Italian meal that evening.  It felt like we were on holiday, although I know most of you think we are on one long holiday!!

Inside the Ubud Palace

The next day we used the hotel’s free shuttle bus to get back into the town.  Cappucino cafes, craft shops and the central crowded marketplace make up the centre of town but once you start exploring you start to come across the many temples.  The first one we entered was the Ubud palace.  Rebuilt after the 1917 earthquake it has many ornate corners and you can wander around the  traditional buildings built around the compound.

The carvings, especially the roofs, were exquisite.  Note the buildings don’t have any walls because it’s so hot and therefore unnecessary.

What an entrance gate

Just north is the Pura Marajan Agung which has one of the finest gates and is the private temple for the royal family. 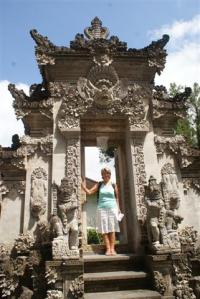 The stone carvings on this entrance was all done by hand, amazing.

The stone work was all hand carved

This is Pura Desa Ubud the main temple for the Ubud community and a backdrop for one of the many performances that Ubud is famous for. 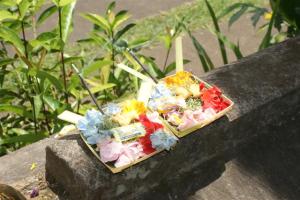 Unlike the Indonesian islands we’ve visited so far, Bali is Hindu and we noticed lots of little offerings around the place.  We were told that once a year the whole of Bali ‘stops’, planes don’t fly, shops shut and everyone stays in their houses.  Why? because the spirits move around to different places on that day and then stay there for the next year.  If anyone makes a noise it attracts bad spirits.  Indeed if you’re found on the streets on that particular day you will be arrested for your own good! For the following year offerings are placed by the spirits new home.  Most of the offering is biodegradable being made of flowers, rice and biscuits and some even have a few sweets in them. 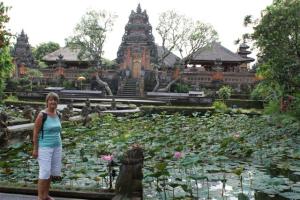 We made our way to the very picturesque Pura Taman Sarawati or the Water Palace.  Waters from the temple at the rear of the site feed the pond in the front, which overflows with pretty lotus blossoms. 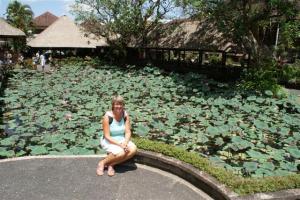 The temple behind was equally beautiful.

Lunch with Carol in the Cafe Lotus

We heard that morning that one of our friends from the Blue Water rally was in town.  We arranged to meet her in the Cafe Lotus overlooking the Water Palace.  We reserved a nice table with a lovely view of the garden and had a great time catching up. 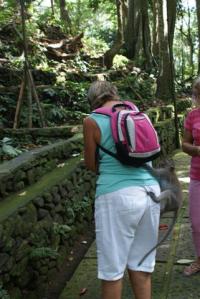 The monkey started climbing up me.

After lunch we walked around the Sacred Monkey Forest Sanctuary which is inhabited by a band of grey-haired, long tailed, Balinese macaques.  They are very greedy and always on the lookout for food.  One of them decided to climb up me onto my back.  After all the warnings that they are dangerous I was quite worried but it soon jumped off when someone held out a peanut for it.

The babies were sweet 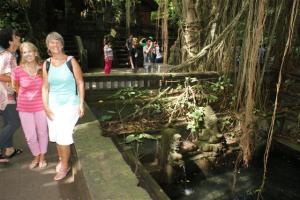 Further in the forest were more temples covered in foliage and more monkeys giving it a real Indiana Jones feel to it. 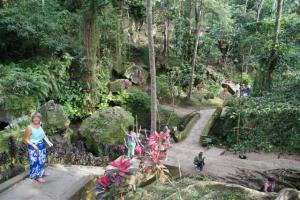 About a mile outside Ubud is Goa Gajah (Elephant cave) which Carol took us to.  The origins of the cave are uncertain but it probably dates back to the 11th century.  It was rediscovered by Dutch archaeologists in 1923 but the fountains and pools were not found until 1954.  The cave is carved into a rock face and you enter through the cavernous mouth of a demon.  Inside the t-shaped cave are various statues but it felt very oppressive inside and we hurried out.  The surrounding gardens were very attractive.

Bill and Sue in sarongs.

As it was a temple Bill and I had to wear sarongs around our shorts.

That evening we saw our first dance performance.  It was a kecak or Monkey chant dance which we were told was a classic Balinese dance.  The performance was in one of the temples adding to the atmosphere.  The costumes were beautiful.

Afterwards we had a wonderful dinner with Carol at her friends restaurant, Waroeng Bernadette.  We enjoyed a delicious Rendang, slow cooked beef in a spicy sauce.