Camomile Slowly on the Mend 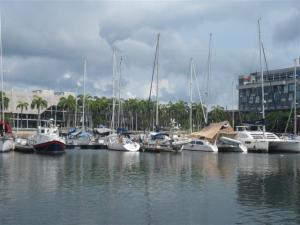 So this is where we’ve ended up having booked a pontoon for a month that will take us up to 12th June, hopefully we can get the boat restored in that time. Puteri harbour is only 2 years old being part of the Kota Iskander project which is going to see a development not unlike China’s Shenzhen formed over the next 10 to 15 years. 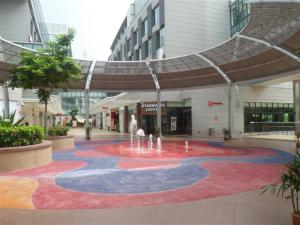 New shopping complex with Starbucks looking over the marina

A new shopping complex has been built alongside the marina. Already there are a number of restaurants and cafes including a Starbucks so I don’t mind being stuck here for a while. Also our friends Jake and Jackie on Hokele’a, Bill on Soltice and Jack and Zdenka on Kite are on the same pontoon waiting for the season to head south so we aren’t alone. It’s a bit out of the way here but the marina runs a free bus to the big mall at Bukit Indah on Thursday morning and they will take us to the beautiful gym and pool at Ledang on Monday, Wednesday and Friday mornings so all in all it’s a pretty good place. Better than Danga bay, I’m never going back there.

So where to start? Having dropped Angela off at Singapore airport we went back into the city to Simlin towers to start looking for parts. It soon became obvious that the sort of things Bill needed to repair the boat weren’t going to be available here. We also went out to Changi Sailing club where there were, allegedly, lifting facilities. This consisted of a little wagon capable of lifting up to 10 tons? and a clapped out tractor to tow it, I don’t think so. The only other option at the other end of the scale and the country was Raffles marina, which, apart from costing a fortune, couldn’t fit us in until mid July.   So we returned to the boat. 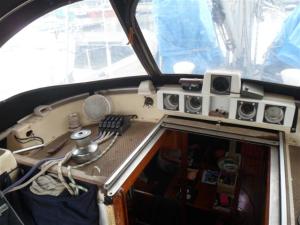 Bill has stripped out the old instruments

On Thursday the company from Singapore that Bill has been talking to, who looked like they would be able to fix the boat, came over to look at the state of the Camomile and quote for the replacement of all the instruments. Bill managed to borrow some fridge parts to get the fridge going again until our new one arrives. Hooray at least we can have a cold beer. Bill spent the rest of the week on the internet researching and ordering parts in the UK and started stripping out the old instruments while I started writing the story of Angela on board. Royal Sun Alliance has agreed to an interim payment so we can get things going. The wheels are slowly turning.