← The duty free island of Labuan
Underwater at Lankayan Island →

Joining the Rally in Kudat

Leaving the Rig support vessels behind

At the beginning of the journey to Kudat a gentle breeze in filled our sails and gave us 2.2kts of speed, hmmmm this was going to take a while. We realised that the island was shielding us from the wind and, despite hoisting the cruising chute, we’d have to motor. We soon left the rig support vessels behind us in the distance. If you look in the foreground of this photo you can see the tips of part of a tree sticking up in the water. That’s the sort of thing we have to look for on this coast, the tropical equivalent to icebergs.

We had decided to do one more night sail mainly to catch up with the rally but also, with the swell that was running, any anchorage on this side of the peninsular would have been untenable.   By 15.00, when the sea breezes set in, the mainsail and the cruising chute were back up and the engine was off; we were sailing again. By 18.00 the wind had got stronger and the cruising chute was replaced by the genny and the sea was getting rougher. By 23.00 the wind died completely and the engine was back on. I went to bed at 2am, although sleep was impossible in the swell that was hitting Camomile from the west. Bill came up on watch just in time for the squalls to start; poor Bill got soaked. The wind was up and down during the night, as the squalls crossed our path. At 6am I came back on watch and we were sailing although it was like a washing machine down below and I hadn’t slept much. Bill went down to try to sleep but by 10.00 he was back on deck as we started having 30/35kt squalls. This is Mount Kinabalu, I had hoped to see it in all its glory but it was shrouded in cloud for our journey. Unfortunately we had the tide against us giving us wind against tide and we were only achieving a boat speed of 4kts.

Approaching the northern tip of Borneo

At 2pm we rounded the tip of Borneo, this is the most northerly part of mainland Malaysia.

Much calmer on the eastern side

Thankfully the swell disappeared as we started heading south on the other side of the peninsular. I was hoping we would arrive in time for the trip the rally were running to a Longhouse further inland that was leaving at 4pm, the GPS was giving us an arrival time of 16.01! As we approached I called our friends on the boat Jackster and asked them if the coach would wait for me, although Bill wouldn’t be able to leave Camomile if we had only just anchored.   As we arrived at the anchorage and dropped the anchor it was indeed 16.01, how clever is that? Dave very kindly came out to get me in their dinghy and I was whisked away leaving poor Bill to sort the boat out. Luckily he didn’t mind.

After a drive of about ¾ of an hour we arrived at the traditional Longhouse, which is one of the distinctive features of Dayak life.   The longhouse was raised above the damp jungle floor on stilts and built alongside the beach. In fact this was the stretch of coastline we had battled along earlier in the day. Some longhouses have whole villages living in them but this one was available for guests.   It consisted of a long covered veranda along which were rows of doors giving access to the basic rooms.

Drinking from a fresh coconut

We were invited to sit down inside the veranda and offered fresh coconuts with the top sliced off allowing us to drink the delicious liquid inside them.

The rally was invited onto the beach to watch local girls performing some traditional dancing. Their costumes were beautifully made. The guy on the end seemed to be doing his own thing.

The rocks behind the beach made a wonderful backdrop. After the sun had gone down we were invited into the living quarters of the longhouse for a meal. As we are in the time of Ramadan at the moment many of the locals fast from sunrise to sunset. A delicious buffet meal was served but with very little light it was difficult to see what we were eating; perhaps that was the idea! It all tasted very good and it was nice to have finally caught up with the rally.

Kudat was a funny little town. It had quite a few Chinese hardware stores, a couple of small supermarkets and a handful of eateries. After 2 days of wandering around we decided we wanted to get out into the surrounding islands rather than sit in anchorage surrounded in murky water.

So Saturday 5th July we left early and headed north to Banggi island.   It was beautiful. We tucked ourselves into an enclosed anchorage with little islands to the south covered in jungle. We took the dinghy on a little tour of the anchorage but there were mangroves growing down to the waterline and we couldn’t find anywhere to land. For those following along behind us the waypoint for the anchorage is 07º10.15 North 117º09.5 East. 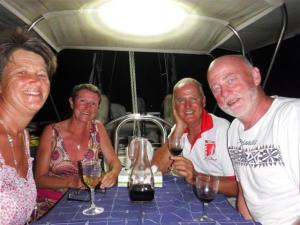 This was the furthest north that we were going this year so the next day we headed south again. Bill wasn’t happy being on our own as we were now in the Sula sea, one of the areas in the world that claims to have pirates. The rally have arranged for us to have a naval escort when we get further south into the more notorious area. We headed to Silk island where many of the rally boats had arrived having just left Kudat. As it was Bill’s birthday we invited our friends Dave and Jacqui from Jackster to come and join us for a meal. We had a wonderful evening together.

← The duty free island of Labuan
Underwater at Lankayan Island →