Continuing on with the story of the refit. 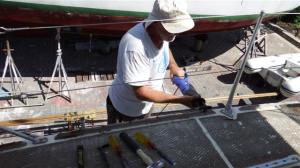 Saturday 28th February Bill continued to remove the toe rails. The problem Bill had was that the toe rails could not be removed by removing their screws because they are glassed in underneath the deck and to remove them would turn into an extremely messy and lengthy job. His plan was to remove the screw heads with a special tool he bought in Australia. It works with a pump action sawing movement and within a minute the screw head pings off. 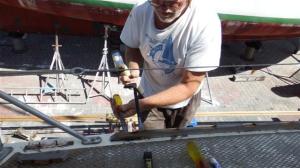 Carefully lift off the toe rails with a crowbar

The next process is to get a crowbar and some screwdrivers underneath the toerail and gradually but carefully prise it off in one piece because Bill needs them intact to use as a pattern for the new ones. 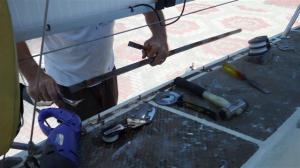 Each one in marked with the position it came from.

It took him the best part of two days to remove them all and sand the deck underneath them all. 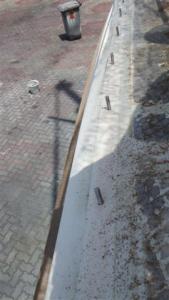 This is what the deck looks like with all the studs sticking up. He removed the grab handles in the same way. Meanwhile I was busy sewing the Velcro on the dinghy cover and fitting it onto the Velcro strip on the dinghy. It all fitted very well but I failed to take any photos. I took it off again because I don’t want it covered in dust while I’m away. 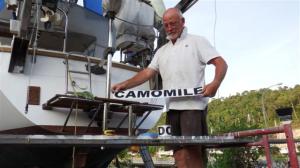 Sunday 1st March after a sumptuous breakfast in the resort (one of our little treats) Bill put Camomile’s name back on the transom. We’d had the vinyl letters made when we were in the UK Christmas before last. It looked beautiful and really finishes off the transom; we are no longer anonymous. 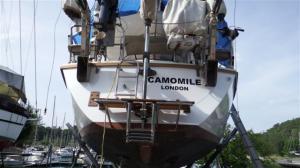 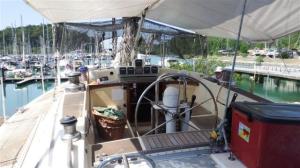 We started striping the cockpit beginning with the cover and framework. The intention is to take the cover back to CJ Marine in the UK to have a new one made.   They made the original but we’ve had some modifications made to it along the way that we want them to copy. 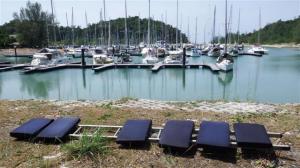 Cockpit cushions drying in the sun 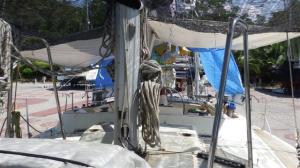 More stored on the davits at the back

I gave the cockpit cushions a good shrub and laid them out in the sun to dry. The halyard bags and the bimini cover and frame were also removed. The cockpit looks bare now. All the frameworks have gone over the davits. 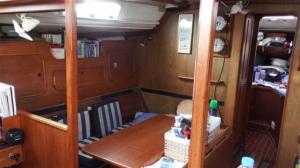 Just a couple of cockpit cushions left to sit on.

I spent the rest of the day carrying the cockpit cushions and the saloon seating down to Norsa.   Bill intends to do some sanding inside the boat while I’m away and I don’t want them covered with dust. I also washed all the curtains and scatter cushions and took them to Norsa to store too and a box of my clothes and a box of bedding. Thanks Sara. 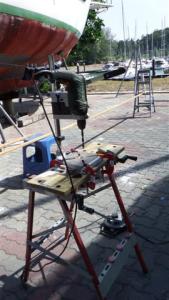 Meanwhile Bill set his woodworking station up. He bought this pedestal base in Australia; it clamps onto his workbench with his drill fitted into it – instant pedestal drill!

His first job was to cut plugs out of the old grab handles. The teal wood is old and worn but underneath it’s perfectly ok. These plugs are used for filling the boltholes when the new handles are fitted. 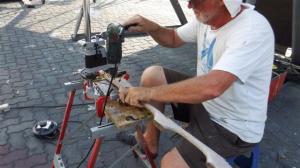 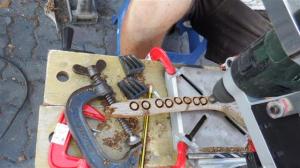 ‘Waste not, want not’ as my Dad used to say. 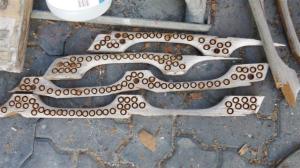 The old handles looked like this when he had finshed 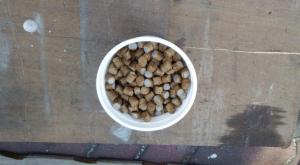 Which became a pot of plugs. 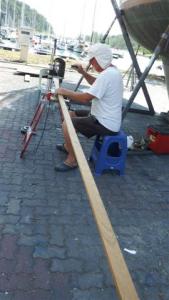 Next job was to prepare the cladding for the rubbing strake along the side of the deck. If you remember again Bill can’t remove it because the bolts are glassed in on the inside of the boat so first he prepares the wood strip by drilling the holes ready to apply.

Then sections are glued and screwed and clamped into place. 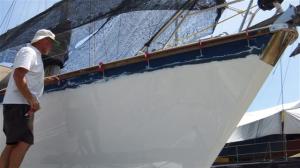 Clamping a section of the rubbing strake in position 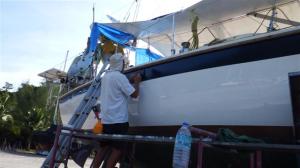 Monday 2nd March we got up early to apply the navy vinyl strip before it got too hot. It went on well. The secret was water, which I sprayed onto the surface and gradually removed the backing while Bill slide it into position before it got to stuck on. It didn’t allow you much time but we managed fairly successfully to get it applied. 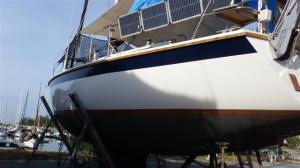 The completed starboard side 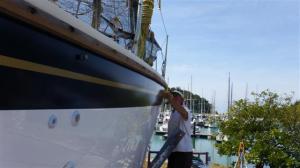 Bill continued to apply her gold stripe or sash as we say. This is why he didn’t mask the top line.  Each layer of paint was gradually blended in and before applying the vinyl Bill thoroughly rubbed down the area so that there wouldn’t be a hard line. 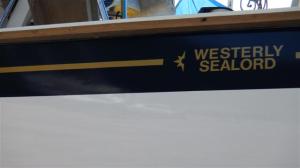 The westerly name back where it belongs

Doesn’t she look beautiful? (This section doesn’t have the cladding on the rubbing strake yet.) When Bill was rubbing down the old stripe he found the original position of the Westerly name under the surface so he’s put it back where it should be. 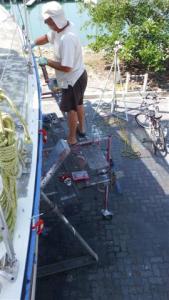 Bill continues with the rubbing strake

We had a new neighbour today and they came over for a chat. His first comment was ‘the GRP has scrubbed up well’ Bill pointed out she had been painted to which he asked who had done that for us.

Bill said ‘I did it’

‘Really, is it sprayed?’

Bill replied ‘No I applied it with a roller’

They were very surprised but impressed.

Later that day we signed up for another month on the hard. We had been trying to get in the water but the woodwork will be easier to do under the shade of the boat.   Bill continued fitting the top cladding on the rubbing strake. 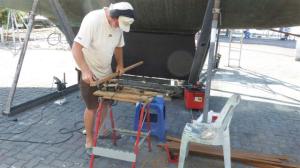 Tuesday 3rd March Bill started making new toe rails by clamping his router to his work bench and passing the wood over it’s cutter to get the shape he wanted, using the old toe rails as guides. 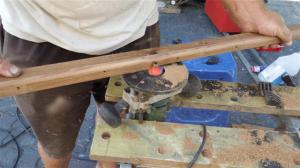 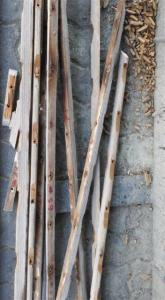 These are the old ones he removed from the deck.

This is the new set, which will go on after the deck has been painted. Don’t they look superb? Camomile is going to look really smart when we’ve finished with her. 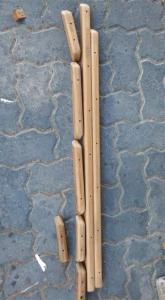 Wednesday 4th March I spent most of the day sorting and packing while Bill continued his woodwork. We had one last minute panic. I had applied for a new passport for Bill on line and was taking his old one back with me to post in the UK. After going through our sets of passport photos we suddenly realised we didn’t have any good enough for an actual passport so we hopped on the ferry borrowed one of Mr Dins cars and drove into town to get some passport photos processed. Fortunately mission accomplished. 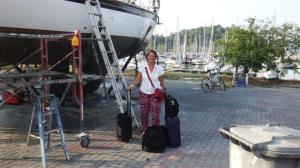 Off to the UK

Thursday 5th March I was off to the UK. I had lots planned – surprise my sister for her birthday, Mothers day, see baby Logan and my middle sister was getting married. If you’re wondering why I’ve got so many bags it’s because I’ve got the old chartplotter and instruments with me to ebay plus the cockpit cover plus all my winter clothes!