It’s a short blog for this week because Bill didn’t take any photos.

Friday 13th March Bill rebuilt the window gaskets, which had cracked up due to the UV damage, by cutting them back and filled and filleted them with filler (taken from Bill’s notes). He also finished bonding on the rest of starboard rubbing strake.

Saturday 14th March Bonded on port rubbing strake and sanded both sides. They look superb, I took this photo when I got back.

Before I left we agreed that Bill would concentrate on the inside jobs and not take the stanchions off (they stop you falling over the edge) until I get back and we go back into the water. The painting of the decks was going to wait until then but Bill had been speaking to some of the locals and was informed that once the rains start in April painting becomes difficult. Also Bill decided that it was easier to paint the decks from the scaffold tower rather than on his knees so the stanchions came off so he could complete the deck preparation for painting. As Bill discovered they were badly corroded they were also added to my shopping list!

Tuesday 17th Bill spent most of the day organising a new lot of primer, undercoat and topcoat in Kuah town.   Unfortunately the topcoat was out of stock but he bought enough primer and undercoat to keep him busy. The rest of the day and most of Wednesday was spent masking the decks.

Thursday 19th and Friday 20th were spent priming and rubbing down in between coats.

Meanwhile having spent two and a bit days with my younger sister Amanda in Surrey, resulting in me driving off in my brother-in-law’s car (all arranged), a days shopping at Port Solent (in the chandlery not a shoe shop!!!) followed by two and a bit days with my middle sister Angela in Basingstoke, I had caught up with all the gossip and was thoroughly chatted out (almost)!

Friday 13th I drove to a trailer company to pick up two tyres and inner tubes – why? – for the dinghy wheels of course! You won’t believe the shopping list I’ve got, I’ll list it all before I return. 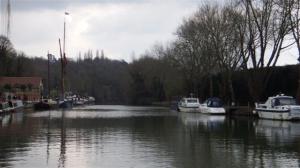 I continued over to Kent to see Thomas; so strange to be able to drop in and see him. I spent the night with Sally and Rob again, and had a lovely evening with cousin Wendie and Haydn joining us, so I could be up early to Gatwick to pick up James. I hadn’t seen him in over a year and it was good to see him again. We drove straight to Kent to join Thomas.

Here are my two boys or I should say young men now.

Thomas had borrowed their friend’s dog for the weekend and we all took her for a walk, so normal.

Selfie with the bearded ones (sorry boys blame Dad for the ginge!) 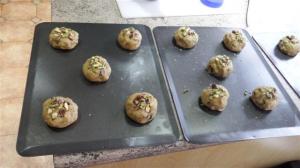 Back at the house Thomas was preparing cookies for baking. This is his new business venture, check out his website www.thomascookie.co.uk I hovered for rejects but there weren’t many. 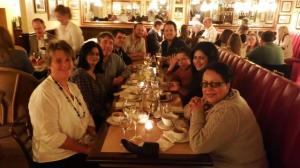 That evening I had the pleasure to meet some of Sonal’s relatives when we all had a meal together. In the picture we have Nalin and Andy sitting next to me, next is Dave, who is involved with the Cookie company too. Then my James and Thomas, Little James and Ben are next then Sonal and her mum Meena. The little boys were so well behaved, so unusual these days. It was lovely to meet everyone; we all had a really nice evening. 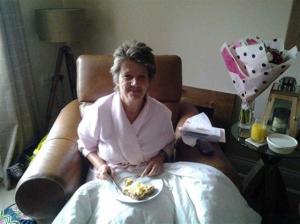 The next morning was Mothers day, my first with the boys for about 6 years. James cooked me my breakfast before he and I drove to Aylesford Farmers market to see Thomas’s stall. It looked very professional. I bought some cookies with a small family discount!

In the afternoon James and I drove to Sonal’s brother Amit’s house and had a delicious meal with Thomas and Sonal, Sonal’s mum Meena and Amit’s wife Jen. It was a lovely family occasion.

Monday 16th Thomas took James back to the airport and I headed to the outlet centre in Chatham to buy some bits for me, some for Bill and some for Camomile. 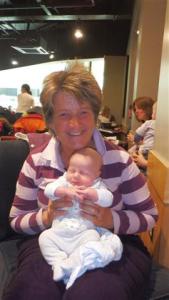 Tuesday I headed back to Angela’s to meet this little chap, isn’t he gorgeous. Logan is 6 weeks old here and I love him, he’s so good. My first great nephew, makes me feel quite old.

I spent the next 3 days shopping for boat bits either online or in the chandleries in Southampton.

Friday 20th March was my sister’s hen night. Fortunately we all opted for a nice meal in a restaurant so no men taking off their clothes! It was a lovely evening with not too much to drink.