Refit Week 10 and the Toe Rails 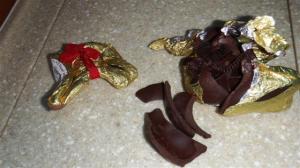 Sunday 5th April was Easter Sunday.   Last year I didn’t even get the sniff of an Easter egg; this year I bought some Easter bunnies to take back with me. Sadly one was smashed to bits and there was chocolate everywhere, the other one had melted and collapsed.   Don’t worry fortunately both were still edible! So it was Easter bunnies for breakfast in bed before the unpacking started. Most of my washing was done thanks to my sister but Bill hadn’t done any while I was away. Fortunately (or unfortunately if you got too close to him!) he hadn’t changed much either so there were only a couple of loads to do!

I spent the next couple of days feeling generally under the weather. I’d arrived back with a really bad cold that I’d caught from Angela’s hairdresser, I always suffer from jet lag for several days and I felt homesick. I’d had a lovely time in the UK and although it was good to get back to Bill I missed everyone. 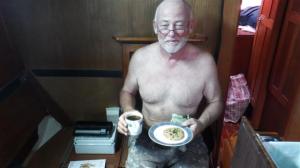 It didn’t help that the boat was covered in dust and the cushions were still over in Norsa. Poor Bill had spent half a day before I got back cleaning and changed the bed but it was only ‘man cleaning’ and the boat needed a good spring clean. This is Bill enjoying his ‘Thomas cookie co’ cookie; one of 5 that managed to get home in one piece.   You can see the general state of the boat behind him. 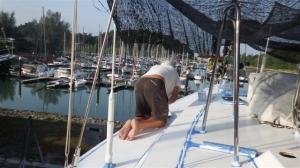 Finishing off the painting

Bill had one more coat of the topcoat with the non skid granules to do so continued with that. I can’t believe the difference in the boat, it’s incredible what he’s achieved. His work has received lots of compliments in the boat yard, from professionals as well as fellow yachties. 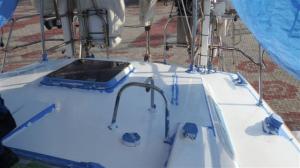 The aft deck masked up 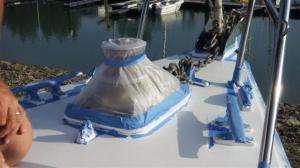 The anchor winch masked up on the bow

The deck is still covered in blue masking tape, which needs to be removed once the painting has finished. Bill thought that would be a good job for me, cheers, there go my nice long nails! I don’t mind really it’s nice to be able to help, there isn’t a lot else I can do really.

Bill took this photo from next doors boat with me sitting in the cockpit ‘relaxing’. 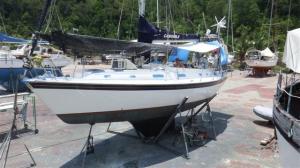 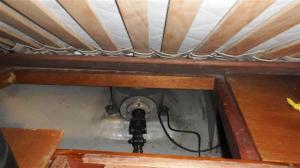 The gearbox under the bed

In between painting Bill got on with the inside jobs. One of the first things to fit was the new steering flange bearing so the floorboards could go back down and I could re-stow all the bags. This is the gearbox, which Bill had out to service.

The flange in place

It was attached to the steering flange bearing that had seized and the bearings were like red dust. 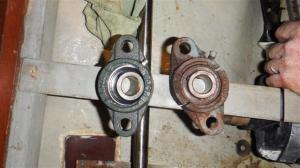 The new and the old flange

Bill had to cut it in half to remove it from the shaft, which fortunately was still in good condition. The new one was put back in place. Luckily Bill had found this problem otherwise it would have caused difficulties further down the line. The floorboards and the bed were put back.

I spent the next couple of days washing (some of my new clothes had chocolate on them), ironing and repacking the bags although there wasn’t so much to repack because I left a lot of my winter stuff behind to make room for the boat bits and my new clothes. I took the ferry to Langkawi to do a bit of shopping in the local shops but I was still feeling fairly sorry for my self.

By Thursday I felt much better and set about spring-cleaning the boat. I took clothes out of cupboards, books off of shelves, ironed the curtains and re-hung them, cleaned all the galley and generally cleaned away all the dust that had inevitably spread itself around while Bill had been working on below decks projects. The newly varnished floorboards looked much better once they were clean. All that remained was to get Norsa’s keys and go and fetch the saloon cushions. 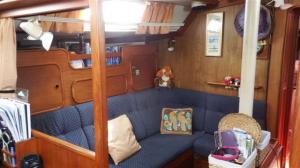 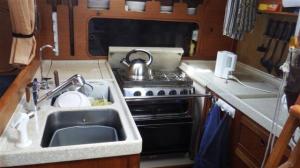 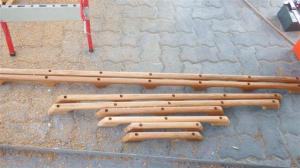 The set of grab rails

Before I returned Bill had signed up for another 2 weeks on the hard so he could finish his woodwork in the shade of the boat.   These are the new grab handles.   They won’t be put on yet because Bill is concentrating on completing the ‘out of the water’ jobs which includes anything that can be achieved by using the scaffold tower rather than working on his knees.

Also on the Thursday Bill started replacing the toe rails. You may remember he had removed them by cutting off the top of the screw heads, easing off the old wood and leaving the stud of the bolts in place. Now the painting was finished the toerails were next. 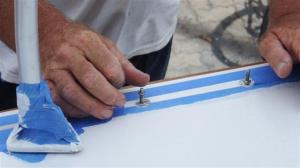 Putting in the first nut

First a special home made cutter was used to create a shallow counterbore around the exposed stud. This then took a square nut, then a lock nut and provided a recess to pot them with epoxy resin once they were seized hard to the stud to discourage it from turning when the toerail was loaded. 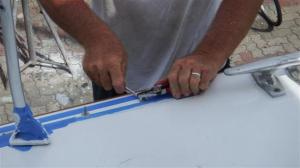 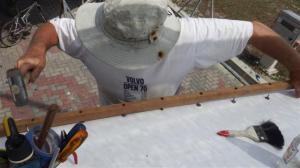 The toe rail is fitted

The toerail is tried for size. Note the curve that the wood has got to bend to. A fresh layer of blue masking tape is applied which Bill scores around the toerail with a knife to leave the centre of the masking tape free. 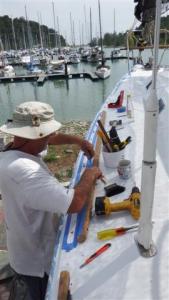 The toerail is also masked up.

The black Sikaflex is applied and the toerail is eased into place. 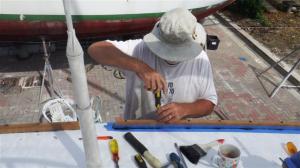 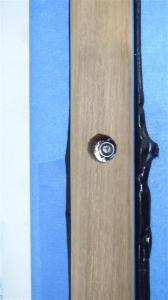 Looking down into the hole to see the nut in place

A washer and a third and final nut is loaded into the counter bore in the top of the toe rail and is tightened down (without the stud spinning) to squeeze the mastic out from under the rail. Finally Bill plugs the holes with his home made plugs and epoxy resin. 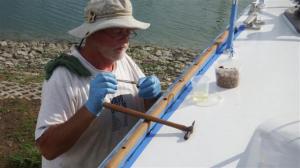 Bill plugging up the holes before the rain came

When it’s dry the masking tape is removed leaving a nice clean finish to the job.

It took two days to attach the new toe rails to both sides. On the Friday evening after he’d finished the heavens opened and we had a massive downpour. It rains in paradise too. 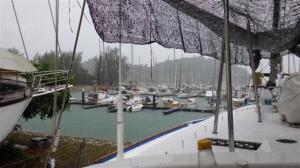 The rains have started