Saturday 11th April was the first day that I started feeling like my old self. I had a shower, washed my hair and we jumped on the ferry to pick up one of Mr Din’s cars. Bill needed some more paint, sanding discs and other hardware bits and I needed to pick up some food and, more importantly, wine. I’d got a few bits in the marina shop and from the fruit and veggie man but we needed snacks, bread, and store cupboard stuff as well as the wine. We headed to Starbucks for coffee and later had lunch out.   Every day normal stuff to a lot of you but a treat for me. When we got back Bill started masking the stanchion bases ready to attach them the next day.

Sunday 12th back to work again. We still didn’t have any stanchions or guard rails so the next job for Bill was fit the bases in between the new toe rails.   Bill was able to reuse some of the bases but I had bought 4 new bases as well as 6 new stanchions in Port Solent and brought them back with me. Bill attached the bases with bolts and a layer of sikaflex under them.

Coming along but still missing a lot of fittings

Unfortunately the stanchions can’t be fitted yet because they need bending to shape and that’s classed as an in the water job. We have so much to do we have to prioritise and stick to jobs that we’ve decided to do before we get dropped in, which could be next week. The deck looked great when he’d finished but still missing a lot of fittings. 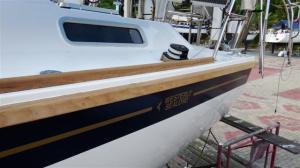 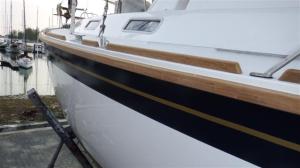 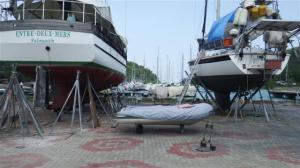 Washing drying in my garden

Bill on a tea break

I had managed to remove the blue tape from everywhere; it takes ages to remove it neatly. I changed the bed and fitted the lovely new mattress cover, fitted sheet, pillow covers and pillow cases I had brought back with me. They had been wrapped round the stanchion bases to protect them. I like putting my washing outside to dry. Bill had created a bit of a back yard for us. The boat to our left is an old tub that looks like it’s been there for years but on our right side the boats have been coming and going and our ladder always gets moved because it’s in the way so Bill has put it on the other side. Bill has his ‘workshop’ under the left hand side of the boat out of the sun. The dinghy is our front fence and I found a couple of old chairs lurking around the hard stand. So we have our tea breaks in the garden.

This is Harry the Hornbill, he’s beautiful and very young but he’s decimated the tree in front of us eating the new leaves. He watches us sitting in our garden.

Monday I got up early to start my joggy trots again.   I had bought some lovely new trainers in Kent with James’s help and wanted to try them out. It was like running on air. Bill spent the day waxing the hull, which is the last job he needs the scaffold tower for so we could hand it back.

Tuesday and Wednesday Bill worked on preparing more woodwork. Among other things he sanded down the cockpit grating. It came up like new, as did all the other bits he’s renovated. I removed the very last of the blue tape, I still keep finding bits, and continued writing my blogs trying to catch up. At the end of the day we went to the pool, the first time since I’ve been back. 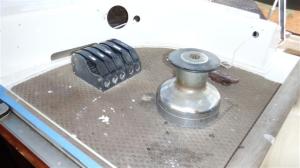 Thursday was cockpit day. The winches, clutches and cleats had to be removed so Bill could start preparing the new teak decking that he intended to replace the treadmaster with. Unfortunately the bolts that had to be removed to get them off were covered by the headlining and Bill struggled to get underneath it. To take the headlining panels down is a major disruption, which is why Bill chose to paint around some things on the deck rather than remove them. 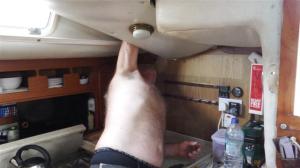 It took several hours but between us we eventually achieved it. You can see the contrast between the new paint on the cockpit combing and the old GRP in the cockpit. The cockpit painting is another ‘in the water’ job.

The big sheet winches had to be removed too, which had Bill contorting into awkward corners of the deck locker and under the headlining above his workbench. Eventually they were all cursed into submission!

Finally the treadmaster had to be ground off creating an awful dust cloud but leaving a lovely smooth surface for Bill to start creating his teak bridgedeck that he’s always wanted. 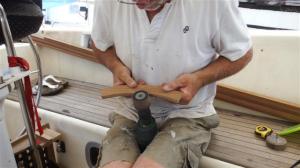 Friday I went for my usual trip on the ferry with my friends to do our shopping with the little Chinese ‘man with a van’.   When I got back Bill had started making the pieces for the new deck. The first piece had to be made curved and took Bill a while shaping it with a bobbin sanding head on his drill.

For the next piece he used a jigsaw, he pointed out that he was using my Dad’s old jigsaw, I think Dad would have approved of its use, that’s if he didn’t cut his hand off in the process! 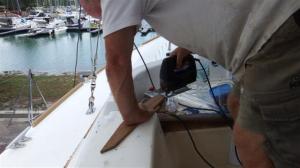 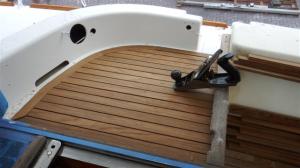 By the end of the day, after many times up and down the ladder, he had produced this; it’s going to look stunning when he’s finished it.

We were supposed to go back in water on Monday but we’re not ready so we’ll have the rudder put back on instead.

Meanwhile Bill is creating another mystery object, what can it be?