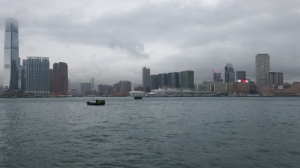 Wednesday 2nd September was our 37th wedding Anniversary.  I had planned our trip around this date and the plan for the day was to take the Star ferry to Kowloon, walk along the Tsim Sha Tsui promenade, visit the Hong Kong museum of history, visit the Wong Tai Sin temple, tea at the Peninsular hotel, visit the jade market and the Temple street night market.  Seems like a lot but they were all fairly close together but we woke up to this. Grey skies and pouring with rain. We sat in our hotel room wondering if we should revise our plan but it would be difficult to change things now.  Any way we’re British and a bit of rain hasn’t stopped us in the past and it wasn’t going to start now. Luckily the bus for the ferry stopped right outside our hotel so we jumped on.

The Star ferry was started in 1898 by a gentleman called Mr Dorabjee Nowrojee.  At that time the only people allowed on the first class upper deck were Europeans and a collar and tie was mandatory.  These days any one can enjoy the 10 minute journey and at $2.50 a little over 20p, it must be the cheapest cruise in the world. The present 1960’s fleet are still berthed in the same fashion with a hemp rope being caught by a billhook.  The ferry has two entry points without a public stairway between the two floors.  We inadvertently got on the lower deck and rode as second class passengers.  It was still raining. 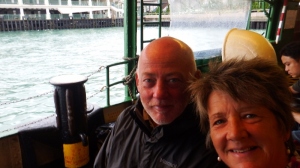 The rain had eased briefly and we started walking along the Tsim Sha Tsui promenade which gave spectacular views back across Victoria harbour to Hong Kong island but the storm clouds were building.  We managed to get to shelter before this view…. 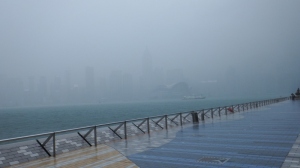 White out along the Tsim Sha Tsui promenade

……became like this. Could have been Brighton on a bank holiday!!

Bill being a geek

We sheltered for about 15 minutes then decided to abandon the walk and head for the Hong Kong Museum of History.  Fortunately Hong Kong is used to the rain and it’s possible to walk large swathes of the town either underground via the underground train system or over a series of covered walkways and we managed to get to the museum only a little damp.  The museum takes you on a fascinating journey through Hong Kong’s past from prehistoric times to 1997. As luck would have it museums are free on Wednesdays – lucky us. We spent several hours looking at the exhibits, it was very well done  except for this life size model of a junk rig which, as Bill had to point out, didn’t have it’s mainsheet attached properly – what a geek! 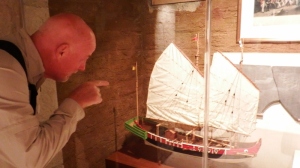 A replica of a temporary home provided by the government after typhoon damage.

There was a lot of information on typhoons in the area and that many homes were lost and replaced with these temporary homes.  Didn’t look like a lot of room for 8 or so people.

The display dedicated to the British handover of Hong Kong to the Chinese government in 1997 was very moving with a short film showing old film clips of the day with Chris Pattern making his moving speech and then joining Prince Charles on Britannia with his family and sailing out of the harbour. It looked like a very emotional time for them all.

We came out of the museum to find it STILL raining and decided to abandon the trip to Tai Sin temple and go straight to the Peninsula hotel.  Most of this journey was completed underground and when we emerged next to the hotel it had stopped raining. The Peninsular is very grand and we were worried we wouldn’t get in and had taken some slightly smarter clothes to change into but there were people looking more bedraggled then us so stayed as we were. 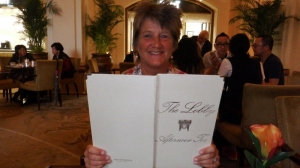 What shall we have?

The quartet in the gallery

There was a gallery for the musicians to sit in as they played nice ‘soft’ music.  We chose Peninsular afternoon tea with a selection of sandwiches and cakes.  The three tier cake stand arrived with two of everything and four warm and freshly baked scones on the bottom tier with jam and clotted cream.  We took it in turns to decide which ones we ate, some of the cakes were very rich; we didn’t leave any for Mr Manners.  We really enjoyed it and everything was delicious but decided it didn’t beat our tea party in Raffles last year for my birthday. 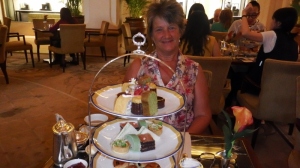 Wandering through the market stalls

By the time we left it was 4pm and the sun was even trying to come out a little bit.  It was too late to go to the temple but Bill said it would be good to have a look around the Jade market and see if there were some ear rings I might like.  I found some really pretty blue mauve ones which he kindly bought me as a memory of our anniversary spent in Hong Kong as well as a nice pink and pearl necklace and a beautiful scarf.  I’m very lucky.

We wandered through the Temple street market as they were setting up for the evening. 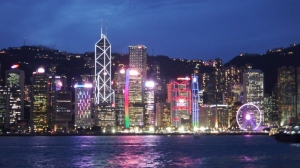 Back at the water front the clouds had lifted and it was now possible to see the tops of the sky scrappers and Victoria peak behind them.  It was an amazing sight.  As it got darker each building had a set of LED lights creating it’s own little light show and altogether forming a spectacular display.  The tall building left of centre with the diamond patterns is the Bank of China headquarters, the smaller building to the right with the red lights is the HSBC building and the circle is a big wheel.  We waited until 8pm for the laser show which was also really clever.  Returning on the Star ferry we sat on the upper deck on the way back. 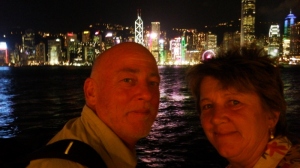 Once back in the city we made our way back up the escalator system to the Italian restaurant we found in SoHo on the first night, the Sole Mio for an amazing dinner.  What a wonderful day we had.