← The Great Wall of China – WOW
The Forbidden City →

After our exhausting day on the Great Wall for our last evening in Beijing we decided to treat ourselves to Beijing’s specialty Peking Duck. Our hotel gave us directions to a restaurant not far from our hotel called Da Dong.  At the time we didn’t realise it was the famous Beijing Dadong which the Lonely planet describes as “Ultra modern Dadong sells itself on being the only restaurant which serves Beijing roast duck with all the flavour of the classic imperial dish, but none of the fat; the leanest roast duck in the capital. For some it’s hideously overpriced and far from authentic. For others it’s the best roast duck restaurant in China”. We would see. The restaurant was on the fifth floor of a very swanky mall. We should have realised we were probably going to blow a weeks budget on one meal when we saw what they were selling on the ground floor. 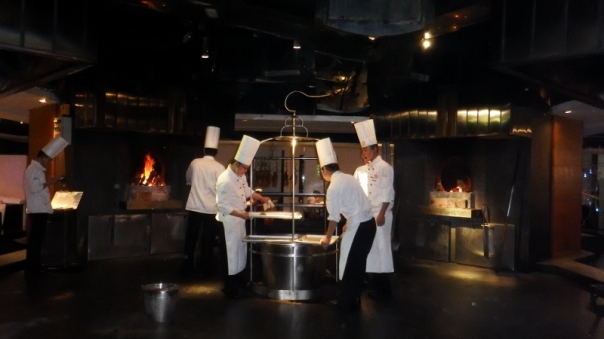 The chefs in the entrance

We were shown to our table and given a menu.  I wondered if they counted the little duck chopstick holders at the end of the day; do you think they would miss it?!!

The prices were eye-watering.    The waitress came to take our order and we said we just wanted to have crispy duck with the little pancakes.  She showed us to the back of the menu where they had the ducks as a set menu and not nearly so expensive as the a la carte prices. So we ordered that.

Each duck came with it’s own chef.  If any one is going to China to do the same thing, make sure you order a whole duck between two people, half a duck wouldn’t be enough.  The waitress brought us our soup while we watched our chef carve our duck beautifully. 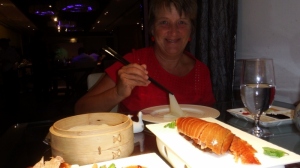 The waitress brought a tray of condiments each with the spring onions, cucumber, melon (?) and various sauces along with the bamboo basket with the little pancakes in, just like the local Chinese take away – except that it wasn’t.  It was the most beautiful duck we had ever tasted. The meat just melted in your mouth, it was delicious. 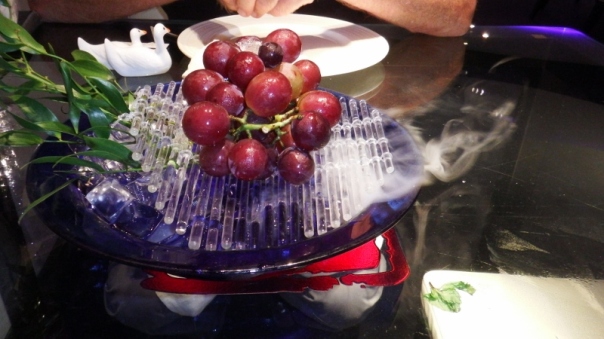 Grapes on a bed of dry ice

To finish they brought us a bunch of grapes but not just on a plate. No. It was a glass dish with dry ice under it. I’m not joking; it looked amazing pouring onto the table.

So that was our last evening in Beijing, we just had the Forbidden city to do on our final day.

And no I didn’t take the little duck chopstick holders!

← The Great Wall of China – WOW
The Forbidden City →