The wind has been up and down for the last 24 hours. We are quite a bit off course to try and stop the rolling and keep the sails inflated. We still have 2 reefs in the main and both the gennies on the port side. The reefs are in the main so the gennies can draw properly. If the main was right up it castes a wind shadow on them. Harry the Hydrovane doesn’t like this point of sail so that’s been off and Hans the autopilot has been on. (We have nothing to do all day except think up stupid names for the kit!) That draws more current from the batteries so then the engine has to be ran for an hour or so a day which is annoying with this much wind.
The net was a little better last night. Some of the boats can’t hear us so well and we can’t hear different ones. It gets very confusing knowing which radios have the problem. Ours is brand new after the lightening strike but that doesn’t mean it’s infallible. Bill has had the manual out and all we can do is make sure it’s on high power, that seemed to help last night. Nicone is still behind us to the south, Inspiration Lady is about 134 miles behind us, there’s a new boat joined called Rise and Shine but they have only just left. Tintin is still about 28 miles in front of us. We both hope to get in Wednesday. Port control has been informed. We have to have an agent for Sri Lanka so hopefully we’ll have a smooth check in. The night passed without incident.

Bill up the mast retrieving the uphaul (rope)

This morning Bill decided to put the twizzle back up. Now we are more north of the rhumb line we can turn more to port and have the wind behind us. It takes about half an hour to rig it. Bill’s on the deck setting all the lines while I’m in the cockpit winching. If you remember the ‘twizzle’ is the joint which Bill made to take the ends of the poles that are attached to the clews on each of the Genoas (gennies) that are hoisted in twin luff groves on the forestay. (Bit technical) It isn’t attached to the mast but held in position by an uphaul and a downhaul. The gennies look like a butterfly when they are flying, I’ll post some photos when we get in. All was well and we were able to hold a much better course and speed.

I was walking through the cabin down below when BANNNGGGG what the….it sounded like the rig coming down! I rushed up on deck to find Bill looking shocked towards the foredeck where the poles were lying. A quick assessment showed the uphaul had snapped and the poles had crashed onto the deck with the sails flogging. Bill set about winching them in while I controlled the sheets. So far so good. 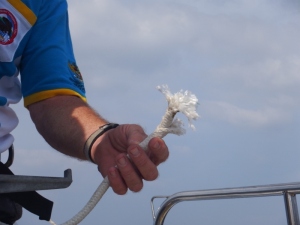 The rope chaffed right through

Then the fun started. The uphaul was flying about in the rigging, Bill was going to have to go up the mast, normally a complete no no at sea. Luckily we have mast steps but I wouldn’t let him go up without a harness. With harness on and me pulling up the safety line he climbs half way up the mast and managed to retrieve it without any damage done. The spliced loop which is attached to the shackle had chaffed right through. Bill regularly checks for chaff but this one escaped him. We’ve used the system for 1000s of miles but it just suddenly went.

Bill cut off the old splice and put some whipping around it to stop it fraying. It’s now tied to the shackle with a bowline. We rerigged it again and all seems ok. Miraculously there doesn’t appear to be any damage, considering the force it came down with we were expecting to see a gauge in the deck but we can’t see anything. Bill’s paintwork is pretty strong. And so we continue.

Back up and running again