← The Island of Praslin, Seychelles
Mayotte and the passage to Madagascar →

Passage from Seychelles to Mayotte

I’m writing to let you know we have arrived safely in Mayotte which is one of the Comoros islands off the east coast of Africa. It was a fairly uneventful passage with just a couple of bouncy bits. 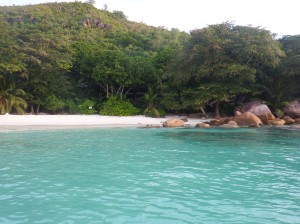 The beach at Anse Lazio

Last weekend Camomile and Tintin were anchored at Anse Lazio on Praslin, one of the islands off of the Seychelles, a truly beautiful spot, when we heard our friends on Adina had decided there was a weather window good enough to leave. Both Bill and Kevin had been saying the weather was good to go but Jacqui and I were enjoying the island. After a little meeting consulting grib files and predict wind software it was agreed we should leave too. The passage from the Seychelles to Comoros/Madagascar has a bad reputation and it would be good to get it over as there did indeed look like a good weather window was coming up. 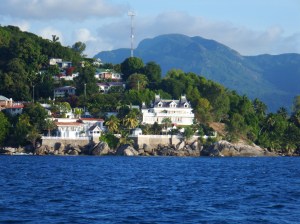 One of the beautiful properties on the northern headland 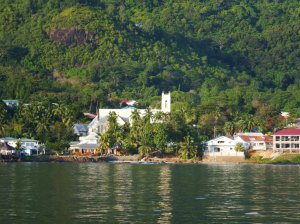 The pretty church near Beau Valon

We arrived back in Victoria harbour on Sunday 31st July and starting working on leaving straight away. Fueling, washing, shopping still had to be completed before we left. Adina had left that morning. Monday morning we all walked to port control to start the process of checking out and by a stressful Tuesday afternoon we were good to go. We motored the 2 hours around the north coast to Beau Valon to anchor for the night. It looked a beautiful spot, it would have been nice to go ashore but the outboard was on the pushpit and the dinghy was tied up ready for the passage. The waypoint was
04 36.6S
055 25.5E 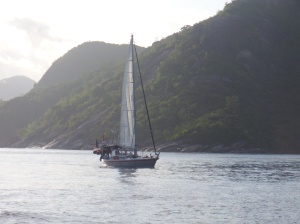 Sailing together with Tintin

Wednesday 3rd August at 07.00 Camomile and Tintin weighed anchor and headed out of the bay. Within an hour the sails were up and we were sailing nicely in a light south easterly on the beam. We were traveling on the edge of the high risk area and this was as far north as we were going in the Indian ocean and the nearest to Muqdisho in Somalia. Hopefully the pirates have gone now but there was no point taking any unnecessary risks so it was decided we would only call on the vhf in emergencies and we also had our AIS (automatic identification system)on receive only. We had planned regular skeds on the SSB instead. The first day was uneventful. The wind stayed at a steady F4 on a beam reach so we made good progress. It was decided to put a reef in the mainsail overnight but it turned out to be unnecessary and it was shaken out the next morning. Our 24 hour run from 10.00 on the 3rd to 10.00 on the 4th was 166 miles – a lot better than the Chagos trip.
The wind dropped a bit on the 4th so we motor sailed for 2 hours to charge the batteries passing the Desroches islands on our starboard side. In the afternoon we passed over the Amirante trench with Alphonse island on our port. As this is the area the Chandlers were taken by pirates 7 or 8 years ago we kept a good look out.
Our plan was to make as much south as we could before we turned to the west. We were trying to keep a course of 220 degrees but the wind got stronger overnight making things a bit bouncy but luckily no squalls. That night the wind had increased to F5 so we put a reef in the main when Bill came up on watch. We had to crack off to starboard to reduce the slamming but tried to sail at 60 degrees apparent to maintain our southing. 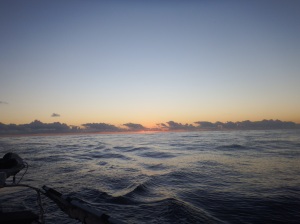 The next morning on the 5th the wind dropped back to F4 and our 24 hour run had been 132 miles. We lost sight of Tintin that day but after a check in on the SSB it turned out they were only 10 miles away from us. They had turned a little more to starboard to give themselves a more comfortable passage. During the night, after passing the islands of the Providence group on our port side, we reached our southern waypoint allowing up to turn more to starboard and the west. It was
09 14.6S
050 28.1E

We were making really good speeds of 7kts and the next morning our 24 hour run was 155. There was probably at least a knot of current helping us along. Still no squalls and no sign of the bad weather often reported on this passage. One of the joys of sailing are the sunrises, they never cease to amaze me. I spent the day reading my book ‘Me Before You’ by Jojo Moyes. I thoroughly recommend it but it has an emotional ending and I sat and sobbed for a full half hour at the end much to Bill’s amusement.
The night of the 6th was going to be the difficult one. We were entering the compression zone of winds that come up from the south on the east side of Madagascar and was a notorious black spot. The forecast was giving 20kts but still from the south east so the plan was to continue on a course of 245 degrees.  The bad weather, according to predict wind and the grib files, was due to start at 6pm. Sure enough at 18.30 we could feel the wind rising and the waves were getting shorter but steeper. By 10pm we had a strong F6 with rough seas, it felt like being in a washing machine. The deck was covered in spray and several managed to find their way into the cockpit. It was forecast to last 12 hours and I kept repeating to my self ‘it will be gone by 6am, it will be gone by 6am’. Neither of us got much sleep that night although I spent a good bit of it cowering in my bed. (I know I shouldn’t be such a wuss but I’ve seen too many of these sessions and know what they can turn into!)By 2am we had gusts of 30kts but fortunately on our aft quarter. It dropped back down to 25kts after a couple of hours. Camomile loved it, we had 2 reefs in the main and a scrap of genny and she was still surging along at 7 – 8kts touching 9kts at times.
During all this we had a stowaway. A blue footed boobie landed just after sunset and clung to the weather end of the dinghy all night. He had no intention of leaving even when a wave washed him onto the solar panel and off the other end. The stupid bird didn’t fly off but clattered back along the solar panel onto his perch and put his head back under his wing. How he managed to hold on is a mystery but he seemed to move with the movement of the boat. In the morning at sunrise he stretched his wings, shook his head and took to the skies leaving a pile of crap on the dinghy and without his ‘takeaway’. When the sun rose I removed no less than 15 squid that had been washed onto the deck with the big seas, along with their horrible black ink, but you’ve got to love those boobies!
Sunday the 7th dawned a much better day. We were now in the wind shadow of Madagascar. The wind was back to F4 and the sea was calming down. Our 24 hour run had been an amazing 180 miles that’s an average of 7.5kph! That was the good news, the bad news was the wind continued to drop and by 2pm had gone and we were motoring. The other good news was we were now 10 degrees south of the equator and out of the High Risk zone. During the day we’d heard that Adina wasn’t doing as well as us having had strong head winds and adverse current on their way to the Comoros they had changed plans and were heading to Madagascar.  Jacqui and I had a chat and it was decided to change our plan too and head to Mayotte instead. There are a lot of problems in the country with a difficult check-in plus there have been a lot of thefts from yachts in the past. Mayotte was slightly nearer and a French administered island. The thought of nice cafes selling coffee and delicious baguettes was too great a pull so we changed course for Mayotte. We were also experiencing adverse current but fortunately without the head winds so continued to motor. Bill spent several hours catching up on his sleep and I had a nap in the afternoon too. After our 18.00 check-in on the SSB Tintin appeared on the horizon

That evening our trip log clicked over 50,000 miles since leaving the UK. 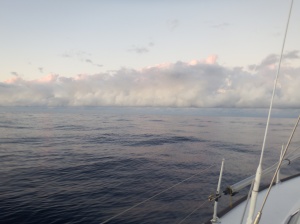 It was also getting colder. We were now 11 degrees south and needed fleeces for the night watch and a blanket on the bed.

The next morning just after sunrise I noticed this strange bank of cloud in front of us. I hadn’t seen anything like it before. It looked like there was a bank of cloud or fog below the normal clouds. Fortunately as we motored forward it dissipated.

This was the edge of the cloud bank and if you look carefully you can see Tintin’s mast on the horizon. 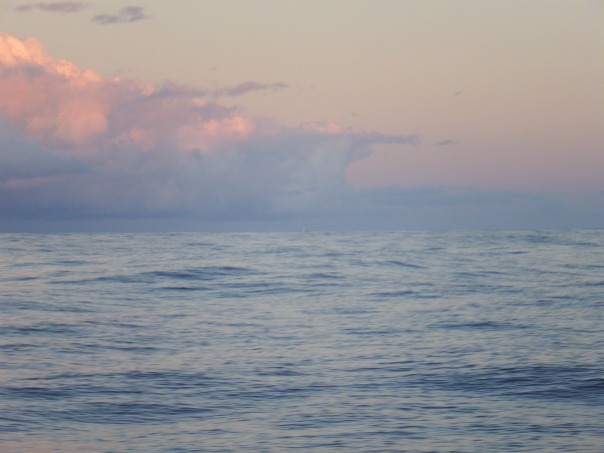 Tintin is a speck on the horizon 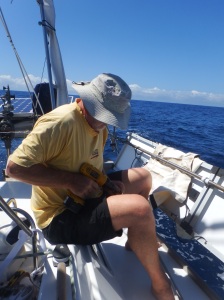 Life continued on Camomile that Monday morning.  We were still motoring with the tide against us and our 24 hour run had been only 115 miles, we sail faster than we motor.  Bill had some repair jobs to do. The solar panels had taken a bit of a bashing during the strong winds and Bill repaired the locking mechanism while we were underway.

The bimini insert piece had come adrift but that was just the zip that needed re-threading which Bill did tooth by painstaking tooth.

I started to clean up by washing down the cockpit and aft deck with fresh water.  Everything was covered in a layer of salt. The water-maker was running most of the day to top up our tanks.

Land was sighted at midday, always a wonderful feeling to know the passage was nearly over. 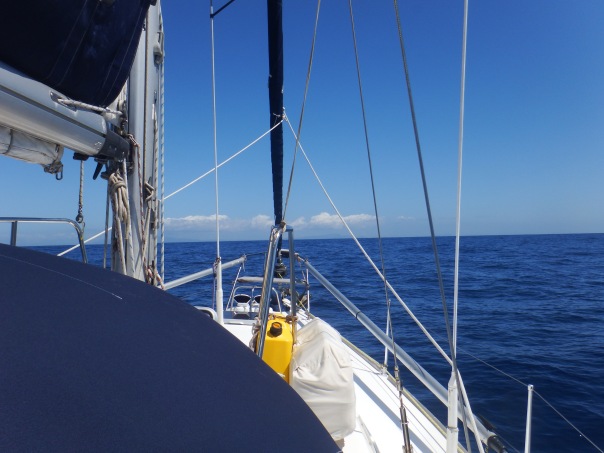 Mayotte seen in the distance 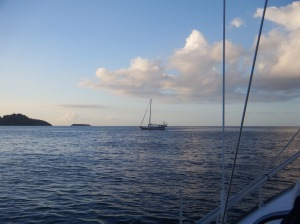 We put the main sail up to give us another knot because we wanted to be in by nightfall.  At 18.15 we dropped the anchor at

Tintin dropped their anchor within 10 minutes of us. Quite remarkable that the two boats had stayed so close to each other during the voyage. It was such a relief to get this passage out of the way. Tomorrow we would head south to check-in but just enjoyed the peaceful still of our  first African island anchorage.

← The Island of Praslin, Seychelles
Mayotte and the passage to Madagascar →