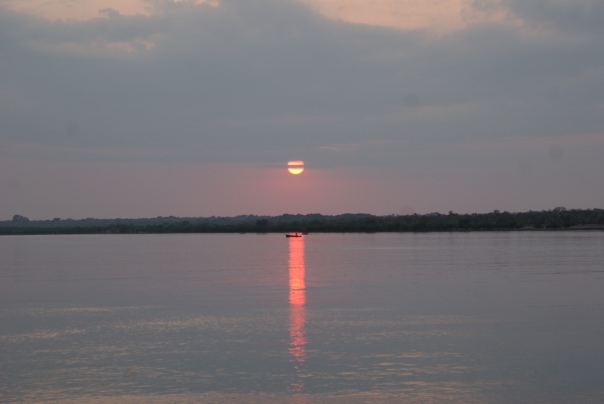 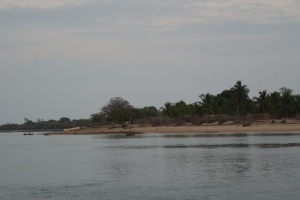 The village still slept as we slipped passed

Camomile and Tintin left Baly bay yesterday at 05.30 with a beautiful sunrise in our wake. 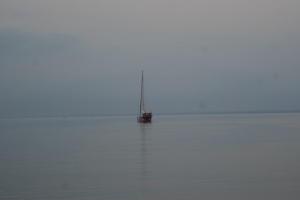 We followed Tintin out of the calm lagoon.

The plan was to head north to get off the shallows and avoid the fishing boats overnight – the wind had other ideas. The sails were hoisted as soon as we got clear of the bay and motor sailed until about 16.00 when the wind strengthened and we were able to turn the engine off. Unfortunately when we turned to the west the wind was right on the nose – why does it always do that???

We persevered for an hour or so but then had to tack which had us heading south again. The wind was forecast to back later and after one more tack we were going roughly in the right direction but that wasn’t until the early hours of this morning. Therefore we had a difficult night with disrupted sleep. This morning at 10.00 our position was 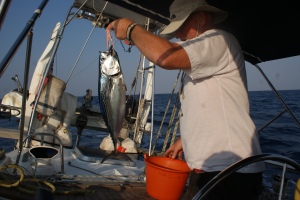 We caught a fish

The good news, WE CAUGHT A FISH. In fact we caught 2 as we had 2 lines out. One got away along with one of Bill’s best lures but we landed the other one. The first fish we’ve caught this side of Australia so that’s over 3 years. It was a blue fin tuna and I managed to cut 4 nice fillets off of it. They turned out quite expensive though because as Bill was reeling in the trolling line the plastic handle, which has sat out in the sun for the last seven years, broke. I handed him the gaff which had been stored under the solar panel but had obviously rotted and broke and fell in the water when he tried to lift the fish with it. It was gutted using my scissors but they were accidentally thrown over the side with the contents of the bucket full of guts. Not sure if we are going to bother again!