South Africa to the Caribbean – day 46

The first time we crossed the equator was with our wonderful friends on the Blue Water rally on the vessels Enchantress, Lucy Alice and Briet they had come to support us after a shroud fitting had broken and we had nearly lost the mast. With the mast strapped down we were unable to sail and they all escorted us to the Galapagos islands sailing alongside us while we motored 900 miles. We all had a wonderful equator crossing party on our own boats while watching each other throw various concoctions over each other as we crossed the line. It’s on the website somewhere I think around March 2010.
The second time was in 2013 after Sail Indonesia as we motored up towards Singapore on our way home after Mum had died.
The third was in 2014 after Sail Malaysia East in the Makassat strait between Sulawesi and Borneo in Indonesia on our way to meet Thomas and Sonal in Lombok. The forth was on our way back up to Singapore again later in 2014.
The fifth was last year 2016 on our way south through the Maldives (it was hot then too)
The sixth and definitely last time was at 3.30am this morning – we are back in the northern hemisphere to stay. 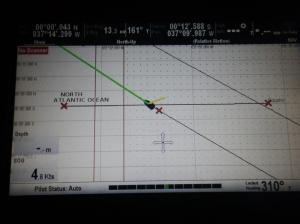 The last few days have been stiflingly hot on board with no wind plus having the engine on made it really hot below deck. We kept having to close the hatches because of the rain showers; I hope to never be this hot on board again. Yesterday, in all that heat, we took the twizzle down as we hadn’t had any rain for several hours and the sails were dry. We didn’t want to take it down while there was a chance of more SE winds but the forecast was for NE winds tomorrow. We dropped the downhaul and Bill took the poles off the sails first taking off the ‘twizzle links’ and re-stowing the poles on the guard rails. We can have both the headsails up at the same time and pull them both to one side or the other but with the possibility of stronger north easters coming Bill decided it would be best to drop the sails and take it off. With no wind they came down easily, lines were swapped, shackles undone and the single headsail reattached, hoisted and furled away. The second sail had come down nicely and Bill and I managed to flake it the best we could on deck and roll it up. It’s now sitting under the table until we can take it ashore in Barbados and fold it properly. All this was done in the midday sun! We didn’t realise until the job was finished how hot we were. I have to have a sleep early afternoon so I can do the first night watch but I just couldn’t sleep because I was bathed in perspiration, I couldn’t cool down.

The black clouds are behind us now and we feel so fortunate to have had such a benign crossing; not a single flash of lightening. Up to the day before yesterday we had only ran the engine for a total of 11 hours just to charge the batteries. It has now been running for 42 hours as we’ve motored through the ITCZ and finally went off at 9.30 this morning as the wind started to fill in from the East. The mainsail went up for the first time since leaving Capetown and the wind is strengthening. We aren’t making our course yet but as the wind gradually backs to the NE we’ll get back on course.

We saw our first ship yesterday, in fact we saw two. There have been several on the AIS recently but they were the first ones we’ve had a visual on. Will need to keep a better look out.

I made a stir fry last night. I sliced up half an onion, half a red pepper, half a green pepper and ‘matchsticked’ a carrot. Stirfry with a chicken breast sliced. I then added a jar of basil, garlic and chilli stir fry sauce from Thailand and some noodles. All cooked in about 10 minutes. YUM.

Bill ate his last apple last night in celebration of our equator crossing, I had some grapes – or they were until they were made into wine. Haha.

Finally a very Happy Birthday to my little sister Amanda. Enjoy your last year of being forty something! See in May, lots of love. XX

All well on board. 🙂

The blog goes through to facebook but we can’t see facebook or your comments. I’ll catch up with them all in the Caribbean. If you wish to email us please use mdqf6 @ sailmail.com (take out the gaps) Stay safe everyone.