This is the same post but I’ve added some photos. 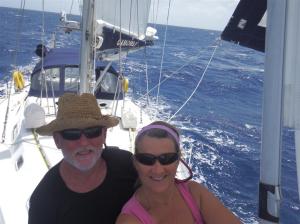 Bill and Sue on the bow of Camomile

At 13.30 this afternoon Camomile crossed the ‘finishing line’. We have sailed around the world traversing all meridians of longitude, the equator and then met our outgoing track here. Eventually we’ll complete our journey and head back to the UK but for now we feel we can call ourselves circumnavigators. Very emotional moment. Can’t believe we’ve actually done it, just Bill and I on our own but that’s basically how its been for the last 8 years. We’ve joined rallies and cruising groups but once you leave port, particularly on ocean passages, you are on your own; completely unassisted.

The line between the green crosses was our track from 2010

From the UK we’ve traveled 58525 miles so far on the worlds oceans and our circumnavigation from this spot on the 11th January 2010 and back to it today was 52365 sea miles or to put it in another context, two times around the earth’s equator.
This voyage has taken us 7 years 2 months and 7 days visiting 44 countries, some more than once, and more islands then we could keep count of – maybe we rushed it!

We haven’t arrived back with a tatty worn out boat either, Camomile is in better shape than ever. During our circumnavigation Bill has kept her well maintained and she has had new electronics including new autopilot, vhf and ssb radios and a new dinghy and outboard as a result of insurance claims from storm damage. Bill has replaced the standing rigging and most of the running rigging (ropes), she has had new sails, stackpack, cockpit cover and bimini, a new cooker and I’ve replaced the kettle three times. Bill also repainted Camomile and replaced all the woodwork (grab handles, toe rails, etc) and the propshaft. So I say to all you yachties working on your boats getting ready to leave, like Bill’s rhyme says JUST GO, there’ll be plenty of opportunity to finish your boat on the way round.

Back stooped and shoulders sagging
Soul and body really flagging
Worn out and weary, time to retreat
Before this daily grindstone has me beat