If you are a long way from help when something like this happens the pressure is on to save the mast rather than get rid of it firstly because it carries antenna for some of the more immediately useful communications and secondly, if you are further than your maximum motoring distance from land, you will need it to get to safety. Even if you have sufficient fuel range to reach a safe haven you are then reliant on just one means of propulsion so if the engine decides to go on strike you are in more difficulty and possibly into abandonment if a tow is not available or feasible.

Our breakage occurred in the early hours  of the morning (for the full drama follow this link to the story – https://yachtcamomile.wordpress.com/2010/03/05/on-to-galapagos/ ) and it took us an hour and a half to stabilise the mast to a point that we could get the boat properly under way again. We sail 2 up so were lucky both in keeping the mast and also in that we knew there were a number of other vessels, who were willing and able to help with a tow, just a few hours away.

Needless to say I have given the matter of what happens if something breaks again some thought since this drama and have to conclude that saving the mast is best. This always assumes that it is safer to do so than to let it fall down but in any event very critical that it be done quickly and so the hour and a half we took was nothing like fast enough. I was simply not sufficiently prepared and therefore “quickly” means being more prepared in advance for the worst.

In Camomile’s case the breakage was in the turnbuckle toggle but it is clear that this is not the only part of the standing rig load-path at risk. Terminals and wire are obvious areas but also the chain-plates have been known to fail on Sealords and similar boats.

Terminals, wire, turnbuckles and chain-plates; so there are 4 possible failure areas and 7 shrouds which means preparation for 28 modes of failure. In considering how to deal with these I realised it was unlikely that a fast and full fix was viable on any of them therefore there were at least 2 stages i.e. firstly stabilise, preferably from deck level, aiming to get into a condition suitable for sailing albeit at reduced capacity. Then the second stage might, for example, be the swap-out of a toggle and bottle screw or chain-plate which may well be feasible in a seaway. It could also mean splicing a Stalock terminal or even the replacement of a complete shroud which I am doubtful could be achieved safely at sea on a short handed boat like ours. A serious injury caused by swinging around in the rigging trying to fasten a new shroud could easily occur and would reduce the effectiveness of the crew by a good deal more than 50% accounting for providing medication to the patient, panic, fatigue etc. The ability to affect a full repair may also depend on how much spare rigging material you are able to store on board your boat. In any event, completing the second stage repair to whatever extent the conditions will allow depends completely on having a stable rig above the heads of the unfortunate crew carrying out the work and so makes planning an effective first response a clear priority.

Camomile carries a masthead sloop rig with single spreaders and a baby-stay making it a  straightforward layout but even so I found it useful to sketch the rig and tabulate the first stage fixes to rationalise common solutions to the 28 failure modes considered.

I had eliminated the use of halliards as a way to secure the mast early on because I had experienced how fast the 12mm braid on braid failed when I had put 6 turns of it around our broken shroud only to see it disintegrate very shortly afterwards. Even if I upgraded all the halliards to Dyneema I do not believe that Camomile’s sheaves would take the loads involved here so when the sheaves failed the upgraded line would quickly fall victim of chafe. Finally I felt that, as the line is turning around the sheave wheel which is free to rotate, the resultant vector of your pull on the halliard is halved thereby diminishing it’s effectiveness.

The 2 main elements which I decided to apply to a total of 9 variations are the detachable inner forestay, which on Camomile goes virtually to the masthead, and a new jury shroud composed of a Dyneema line passed through a loop and tensioned with a heavy duty, truck type ratchet load strop. Both these devices are quick and easy to deploy and winching up the ratchet strop can be combined with the pitching and rolling movement of the boat to crank a considerable load into the rig. Halliards would then be only be used for backing up this solution and spreading the load around wherever possible. I came back several times to my initial scheme between staring at the rig trying to imagine what would be possible from a pitching deck in the middle of the night. Whatever it was, it had to be as simple as possible!

Once I was happy that I’d found a feasible approach I tabulated it and cross checked through the fixes below to ensure that I’d got them all correctly addressed.

Fix 4 – Secure “jury shroud” to forestay or inner forestay chain-plates. Back-up by passing up haul to chain-plate or cleat.

Fix 5 – Secure “jury shroud” to remains of turnbuckle/toggle. Back-up by passing up haul to chain-plate or cleat.

Fix 9 – Secure “jury shroud” to auxiliary chain-plate on davit brackets then strip toggle and fix to chain-plate. Back-up by passing topping lift and main halliard to chain-plates or cleats.

*If a pre-failure mode crack in the strap part is identified in turnbuckle toggles on caps or lowers a 10mm chain would be passed under the u-bolt and the ends bolted through the turnbuckle to form a chain bridge. 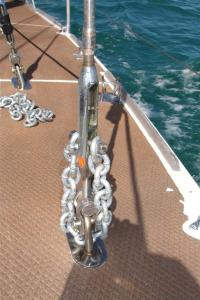 This should prevent the shroud parting from the chain plate but will also remove tension from the shroud when the toggle fails so it may be necessary to re tension by pulling the shroud sideways using a winch or by twisting the chain using a bar.

In order to apply these fixes obviously some additional fastenings needed to be arranged. With the inner forestay this amounted to ensuring that shackles are available to interface with chain-plates as the stay is permanently rigged. However with the jury shroud it was necessary to establish 2 new fastenings on the mast and a method of rigging them. The mast head on Camomile has a spare shroud bar suitable for running a line around so a 5mm mouse was passed through this and cleated off at the bottom of the mast to provide the means of leading the Dyneema line up and through it before it is tensioned up with the ratchet load strop pulling against a chain-plate or substitute. The other, a loop of Dyneema passed through the mast via the shroud terminal slots provides a fastening which is again moused in order to load the Dyneema line as shown below. 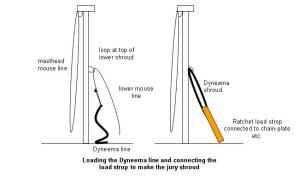 Although this procedure involves the process of hauling up a shroud into place and therefore some additional time it also means that the Dyneema line is stored below out of the way of the aggressive effects of UV and of chafe which might reduce it’s much needed strength.

Camomile’s standing rigging is all 10mm 19×1 which has a breaking strain when new of 7250kg but most riggers I have consulted tell me that this is over specified for the size and weight of the boat. The 12mm Dyneema selected has a breaking strain of 4800kg and the load strops are rated at 5000kg hence the jury stay will hopefully take around 70% compared to a new stainless shroud’s strength. Although the rig is normally tensioned at up to 20% of the breaking strain, loads will fluctuate depending on sail plan, wind and sea conditions however my hope is that sailed carefully and with a little help from halliards acting as back-ups this should be sufficient to keep the rig up until a more permanent repair can be carried out.

Before we sailed off into blue water I has also checked Camomile’s chain-plates. The bow roller which holds the forestay had a crack at one time and had already been modified and re-made. I withdrew the U-bolts that take the caps and lowers, discovered some corrosion and pitting so re-made these, cranking them in line with the shroud pull, upping the diameter, enlarging the sealing plate against the deck and also extending the smooth part of the through deck shanks so that no part of the thread was within the deck when it was firmly clamped down.

Having checked that it was feasible to rig the various combinations by doing some dry runs I then packed the following equipment into a holdall:

This bag is stowed where it can be accessed in a hurry. I also prepared 2 copies of a written emergency procedure, one for the bag and one to be kept at the chart table with the rest of Camomile’s procedures.

The irony that some of the parts in my “shroud down equipment” bag were already on board is not lost on me however with what are hopefully the right parts accessible and a plan in mind I believe it should now be possible to stabilise a shroud problem in a much shorter timescale than before.

So that’s all right then. Now we are prepared? Well not quite…. Following our breakage we motored into Galapagos having covered hundreds of miles with the engine churning away and my stomach doing the same as every roll and pitch of the sea made the cobbled rig creak and groan. We did our rig repair and replaced all the toggles throughout the boat with brand new ones which the manufacturer had kindly provided free of charge. Fortunately the whole episode made me much more diligent about visual rig checks and so it was that I spotted a cracked strand in the port side lower

(caused no doubt by the maltreatment that shroud took while being jury rigged) allowing me to replace all the lowers before this caused a problem.

However I really was totally unprepared for the moment just 6 months later when some good distance south of Fiji’s capital city Suva I spotted the same port toggle strap cracked in the very same way that had caused its predecessor to let go and this just minutes before I planned to tack and put the load of a force 4-5 beat into a short sea onto it.

The manufacturer again supplied new parts but this time beefed them up to hopefully avoid a repeat performance however the worrying part was that this failure followed only 6 months of easy sailing, in benign conditions, in other words, easier on the boat than the south coast in a good season!

For this reason, if I can offer any advice other than to be prepared in advance with a plan along with the right kit where you can find it quickly, it would be to visually check your standing rig top to bottom on a very regular basis. Aim to catch any problem before it becomes a drama.

Developing a response to a shroud breakage at sea

Since experiencing a shroud breakage at sea (  for the full drama see https://yachtcamomile.wordpress.com/2010/03/05/on-to-galapagos/  ) I have become acutely aware that even with only one support gone a mast can be become a serious liability to the safety of the vessel and crew. I was also in awe of the loads involved and shocked by the realisation that it would not even take a moderate sea to turn a breakage into a dismasting.