Male, the capital of the Maldives

It took us 2 more days to get to Male.

On the 18th March we left Viha Faru reef and motored to the island of Kaashidhoo.  This is an image from google earth.  You can just see the entrance to the reef on the west side.  We spent a very scary half hour motoring slowly up this channel in about 3 or 4 metres of water with broken coral under us.  We dropped the anchor as soon as we got into the anchorage at

Would have liked to have gone ashore but we needed to press on. 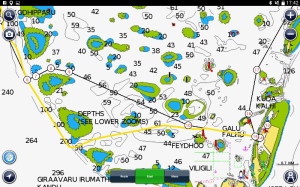 The last part of the journey across north Male atoll

The next day we carefully motored back through the reef at 06.00.  By 09.30 the wind started to blow so up went the sails in time for my SSB net and we sailed for the rest of the day.  Norsa had reported they had arrived at Hulhumale but were having some serious electrical issues.

We had a wonderful sail and went further south than we had planned.  At 15.00 we took the sails down and put the engine on to motor across the bottom of North Male atoll.  The plan was to stay in Male for 4 or 5 days then do a circuit of the atoll with Norsa and hopefully meet Tintin and Inspiration Lady on their way down.

The anchorage at Hulhumale

The waters around the island that Male is built on are deep.  Male is a check in port but it means anchoring in 30 metres plus while waiting for the officials. Most people just hover, no one wants to anchor that deep.  Uligan in the north is best for your check in.  Once checked in or if you are arriving from the north the only place to anchor is off the island north of Male called Hulhumale.  This island is the future of Male.  It’s been created to relieve the pressure of growth on Male.  The anchorage is at 04  13.14N

It was great to see Norman and Sara on Norsa again.  The next day Bill and Norman managed to get Norsa sorted out and it wasn’t as bad as was first thought.

Looking at the screenshot of Hulhumale again there is a dinghy dock right next to where Camomile is anchored (red arrow) and 100 feet from that is the ferry into Male. It cost about 50p and is the only way to get into Male.  You can’t take your own dinghy, there isn’t anywhere safe to leave it. 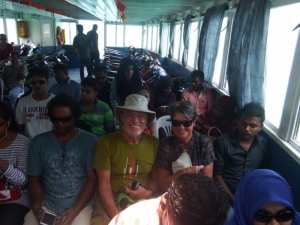 Norman and Sara on the ferry

On 21st March the four of us headed for the ferry to take us into Male. It was a bit of a scramble for seats but we all got in and sat down.  Note the motorbikes at the back of the ferry.

No – there wasn’t a safety briefing!

The chairs were just plastic garden chairs screwed to the floor.

Motorbike coming onto the ferry

Once it was loaded it took about 20 minutes to make the passage.  It was quite a nice way to arrive in the capital.  There were some nice views of the city as we approached.  Back in the 1920s the population was estimated as just 5000 but as tourism grew from the 1970s the growth emerged as a problem.  Male has been extended as far as it can with land reclamation so now Hulhumale is being developed to accommodate the overspill.

View of Male from the ferry

The first job was to find a hardware store – can you believe that?! Although Norsa’s electrical problems were sorted out Norman wanted to get a spare engine start battery.  We had been given various addresses and eventually we found one. There’s a surprising amount available in Male.  There were lots of hardware stores, a couple of chandleries and several really good supermarkets. The fantasy supermarket sold lots of western products although it was a bit expensive.

We also got the dive tanks serviced and filled during our stay. 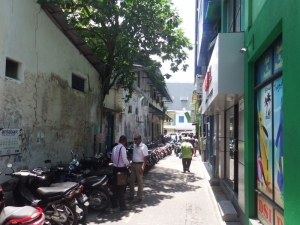 A side street in Male

This photo shows the contrast between some of the buildings.  A lot of Male has been rebuilt or in the process of it but there are still some old properties around.

There were several good markets on the north side of Male.  A fruit and veg one…. 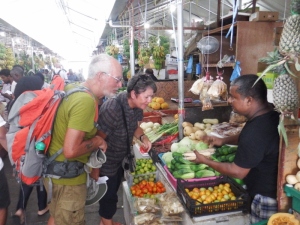 Norman and Sara inspecting the veg.

…..and a huge fish market next door.  The local boats backed onto the quay in front of the market and unloaded their wares straight onto the stalls.  Fishing and the fish market is a man’s world here, woman don’t usually venture into these areas.  Very wise the sight of all the entrails was a bit disconcerting. Surprisingly it didn’t smell. I don’t think you would be able to buy fresher fish. 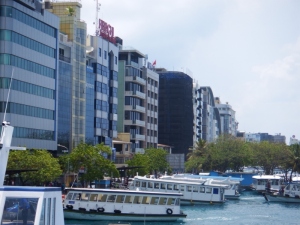 Great views from the Seahouse

Male has been referred to as ‘The Venice of the South’.  I’m not sure I would go that far but it’s an interesting city. This is the great view of the boats in the harbour from the Seahouse, a very nice cafe above the ferry terminal.  They do a very nice and reasonable buffet lunch Sunday to Thursday and reasonable evening meals. It’s not cordon bleu but for good value local food you can’t go wrong.  It doesn’t have windows so it can get a bit breezy but as far as I was concerned that was a plus.

After our busy days shopping we took the ferry back to Hulhumale.  The island/reef in between Male and Hulhumale to home to the international airport. Must be a great place to land if a little nerve wracking because the runway is literally right on the edge of the reef.  We watched the planes coming and going from the ferry.

Back in the anchorage the boats were waiting for us.