July update with James on board – part 1 Fiji

James behind the wheel

We turned up at the hot and humid arrival hall of Fiji’s Nadi International Airport with at least 2 hours to spare but we were both so excited about the arrival of James that we were far too keyed up to sit around Port Denerau where the boat was moored. This would be the first time I had seen my son in 3 years and though Sue had seen him just last year on a brief visit home this was the first time he had been on the boat since well before we left. We also knew that he needed the well-earned 6 week break he was taking from his busy life.  We took a pause to purge the jet lag and reacquaint ourselves with each other. Both of us being engineers, work on the diesel’s cooling system for which James had brought some much needed new parts with him from the UK and then we were off.

Enjoying a meal together

We started with an overnight stop in Vuda point to take James to the First Landing resort and our favourite place to eat.  Our waiter friend Norman (name) found us a good table and served us with the usual delicious fare we had enjoyed before.  James agreed the food was wonderful.

We had visited this western side of Fiji and the Yasawa group of islands twice before and were dying to take James to see all the best bits.  Having rendezvoused with Norman and Sara on their Malo 36, just before sunrise we gently motored out of a quiet bay near to Lautoka and made the day passage northwards skirting Bligh Water.  This stretch of water was named after the infamous captain who, in his open boat, was chased through here by war canoes, into the Tamasua Passage.

After a long day sail we arrived at our first village anchorage at Nabukaru sheltering from the trade winds behind Sawa I Lau island. Anchoring up over night we went ashore the following morning with the traditional offering of Kava root (a pepper with a mild euphoric effect when ground and mixed with water) for the village chief. This gesture is always well received as it marks a sign of respect by the visitor for their culture and, though the days are long gone where protection is needed, grants you their blessing to freely visit their homes and territory.

The lifestyle here is basic and though the houses are often block work with corrugated iron roofing some traditional huts, made with local materials from the surrounding jungle can still be found among the overcrowded living conditions of the newer buildings.  Fijians have the readiest smiles of all the peoples we have met yet on our travels. They are fun and love you to join in. James had a blast playing football with kids on the beach and touch rugby with the men, who were keen followers of the World Cup via radio, on their improvised pitch at the school.

A visit to swim one of the nearby limestone caves ducking under a flooded passage to emerge in a creepy chamber with a vertical shaft letting in just a dim vestige of sunlight to penetrate the gloom was a first for Sue. Underwater caves and spiders, well done her!

The village women cooking the dinner

Sailing south now and starting mid morning ensured that the sun was high and behind us so that we could navigate the reefs by eyeball. The charting for the outlying islands is crude, inaccurate and incomplete so this is the only reliable method to use although I have found that Google Earth with its detailed photographic images, which clearly show the reefs, is incredibly precise if you can arrange to download the area you are in. 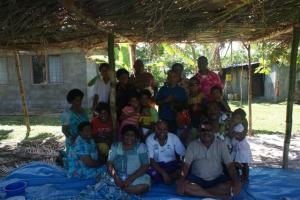 Sani and her family

After the 11 mile hop we anchored up in Blue Lagoon named after the original movie of the same name that was filmed here.  We had come to pay a visit to Sani and her lovely family who had been so kind to us on our last visit almost 2 years ago. We all received a warm welcome though sadly Ratu Saleem, the old chief who had so impressed us before with his worldly wisdom and intellect, had passed away.

We joined the villagers for Sunday lunch

We stayed for Sunday and went to church which is an uplifting experience by the sublime and enthusiastic harmony of the congregation’s singing. Sunday lunch was prepared and eaten in the open air together with the whole of Sani’s extended family and James, who had been scuba diving off nearby reefs, turned up to regale us with tales of his latest adventure instantly disappearing under a host of small black bodies wanting to swing from his arms as he spun them in circles.

There was a sad goodbye to this kind and generous family, as this was likely the last time we would see them but time pressed on and we sailed another short hop south to anchor in Narewa Bay surrounded by miles of curving white sand beach against a backdrop of jungle and swooping mountainous ridges. 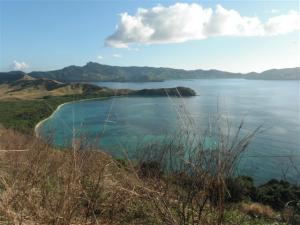 The view across Narewa Bay from the top of the hill James climbed.

The jungle and hills were too much for James and pack readied he made off with a machete to plough through the jungle and on up the steep slopes beyond while his old man looked on from the deck of the boat and wondered how many times he would run out of puff if he tried to do that. Across the narrow isthmus, in a lagoon, a WW2 plane wreck can be found in around 3-4 metres of water on a sandy bottom.

After we had inspected this we sailed south again to the nearby Manta Ray pass. As the name suggests the huge rays, often more than 4 meters across, are sometimes seen here. They are gentle, graceful creatures that come to feed on the small organisms carried by the currents sluicing through the pass and can be safely shadowed at a respectful distance with just a snorkel and mask. We were in luck and James was treated to the rare and exciting experience of swimming and free-diving with these amazing fish. 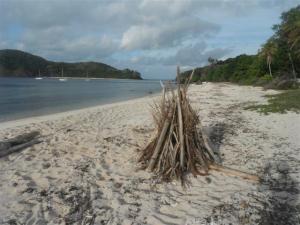 Our next stop was south of the Yasawas in the Mamanutha  group, by the island of Navandra, uninhabited except for a goat. Some of Fiji’s best coral lies beneath the stunningly clear sea in the bay and exploring the deserted beach here and on the island next door was a lovely adventure. James decided to build a big fire in honour of my birthday, which we celebrated while there, but decided not to light it.  It was to be our last taste of the rustic outlying islands with our next stop being the Musket Cove resort on Malolo Leilei. With Camomile med moored stern to a modern pontoon which forms a bridge to a tiny palm covered sandy island with a bar and a range of driftwood fired BBQs we put our feet up for a few days after our recent adventures. Civilisation is welcome when it comes in this form. 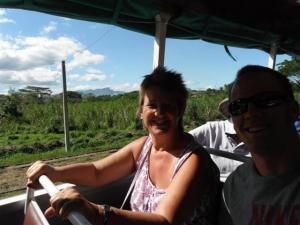 Sue and James on the local bus

We returned to Vuda point where Sue and James decided to go into town on a local bus, windows aren’t necessary. 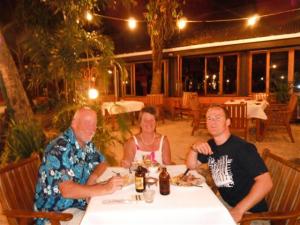 A final meal at First Landing

We had a final meal at First Landing followed by a dance show performed by some locals with a wonderful photo opportunity afterwards for James.

James with the dancers

Time was moving on and so should we. Sadly it was time to bid a fond farewell for probably the last time to Fiji’s shores, one of the most beautiful countries on our travels so far.