Just a quick blog to post some photos of how we finished April. 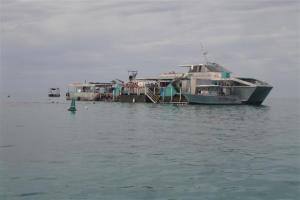 Finally got away from Fraser island 19th April and headed for Lady Musgrave island, our first island in the Barrier reef.  It’s an atoll with a little island in the middle surrounded by beautiful turquoise water and coral heads.  Unfortunately it’s been commercialised with a permanently moored pontoon in the middle of the lagoon next to a large coral reef. Every morning at about 10.00 a catamaran carrying 100 +/- people arrived to moor up to the pontoon giving it the appearance of something out of the film Waterworld.  The surrounding water filled with swimmers very quickly, some of them standing on the coral; an absolute no-no. 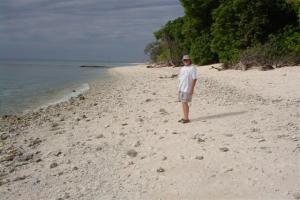 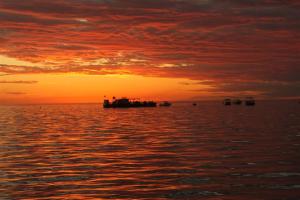 We landed on the island and walked across the beach but it had far too many foot prints for our liking.  Fortunately the day trippers left at 3pm leaving the lagoon in peace and enabling us to go snorkelling.  There were some nice fish and a fair bit of coral but nothing to compare with Fiji yet. 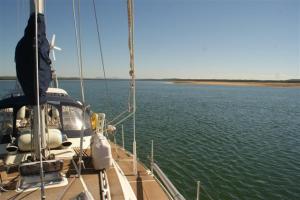 Anchored among the sandbars

Monday 22nd found us in Pancake Creek, a lovely little spot tucked up inside the creek.  At low tide we were surrounded by sandbars, which was good because we sat out a blow there. 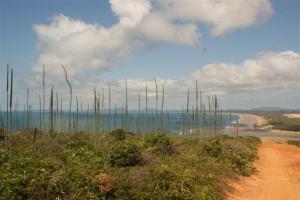 On the 23rd we landed on the beach with Jack and Zdenka off of  ‘Kite’ for a walk to the lighthouse.  We had a wonderful walk to the top and down the other side to the beach for our picnic.  The views from the top were outstanding. 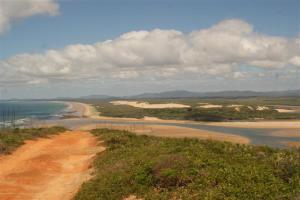 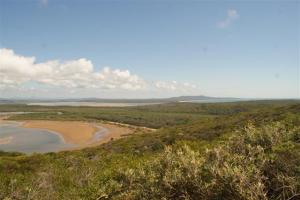 We are anchored in the creek in the background 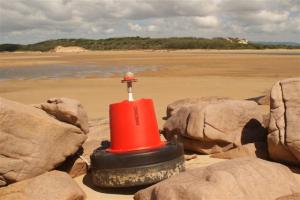 Misplaced buoy on the beach on the other side 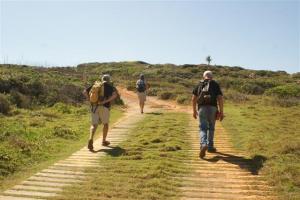 Walking back up the hill 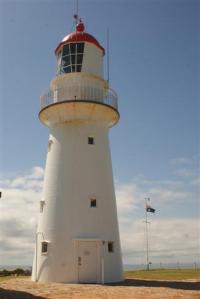 The lighthouse had been lovingly restored and we enjoyed chatting to the old caretaker who still lives next to the lighthouse, although it’s now fully manned.  It seems there used to be quite a community up there in the 1800s.

The little cemetery still contained some old graves which are now protected by pretty picket fencing. 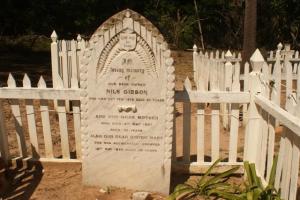 One of the beautifully kept graves 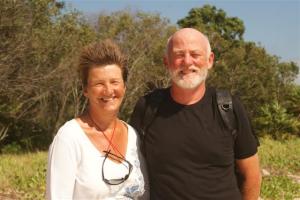 Bill and Sue on the beach

Back on the beach – but it’s windy again! 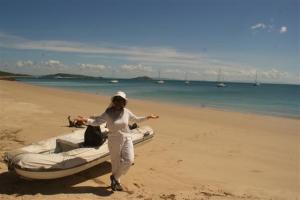 The sandflies aren’t going to get me

We left Pancake Creek late on the 24th for a night sail to Great Keppel Island.  During the night we passed Cape Capricorn, which is situated just above the latitude of the Tropic of Capricorn.  Which means we are back in the tropics where we’ll stay, apart from our trip back to the UK by plane at the end of the year, for the next 2½ years.  The next day we landed on the beach for another walk.  Great Keppel is known for it’s sandflies, not wanting to be bitten again I arrived prepared. 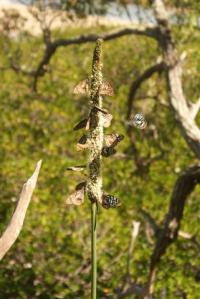 We had a lovely walk.  The island has lots of butterflies attracted by the long spear-like plants.  It was magical walking among them, I haven’t seen so many butterflies in one place before. 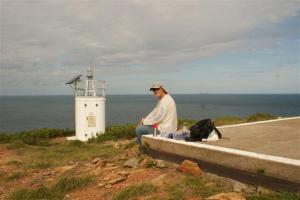 Eating our picnic looking out to sea

We continued up through the bush onto the ridge of the island and continued right along to the lighthouse, where we sat and ate our picnic on the edge of the helipad. 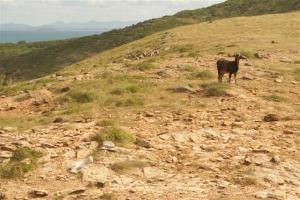 Look for the little newborn goat in the foreground

On the other side of the helipad were some goats and if you look closely at this photo you can see a little white one in the foreground which had been born that morning.  It was wobbly but seemed well. 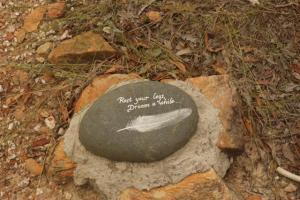 This stone said ‘Rest your legs, dream a while’ 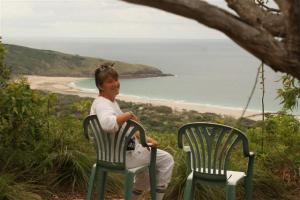 On the way back to the boat we found this little resting place overlooking one of the bays.  The chairs had been painted to blend in with the surroundings and cemented in place so that some joker couldn’t through them over the cliff. It was a beautiful spot. 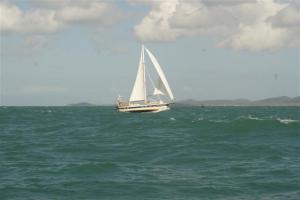 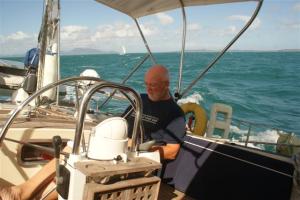 Bill on the helm

After an overnight in Island Head creek we sailed to the Percy islands the next day.  Jackie and Gary went to Blunt bay and we anchored off of South Percy.  It was very remote, even though it’s only about 40 miles from the mainland, and very very dark in the evening. 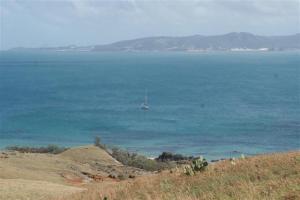 Camomile waiting in the bay

The next day we went for yet another walk (the islands are quite small and each one has different features).  South Percy was totally uninhabited so there weren’t any tracks to follow.  The grass was only ankle deep but spiders and snakes kept running through my thoughts.  We reached the top of the hill to be rewarded with a wonderful view across the bay and Camomile sitting in the middle waiting for us. 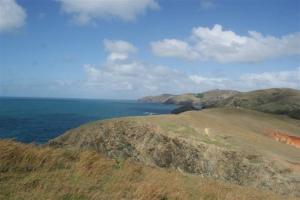 View down the other side

Looking down the other side there were some delightful little bays but they were exposed to the strong winds. 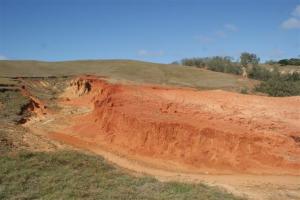 Red soil of the landslip 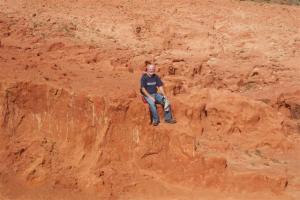 The soil had some great shapes in it

Through the middle of the island there had been some sort of land slide exposing the rich red soil underneath. 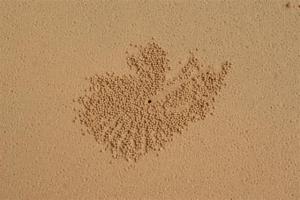 Sand art created by the crabs

We walked back down the hill onto the beach, completely untouched except for the ‘crab art’.  The little crabs collect balls of sand as they burrow into it and push it out onto the beach creating amazing pictures which get washed away at high tide.  The hole beach was covered in their artistic patterns. 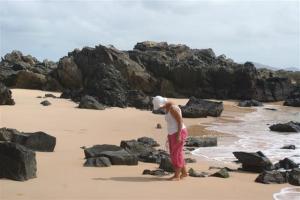 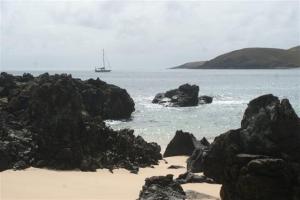 Camomile in the bay

We walked right along the beach enjoying the solitude before getting back on board for a night sail to Mackay for my birthday.