This story is old news now but I’d written it and it continues the story so I decided to post it.

The entrance to the resort

We spent the next couple of days making our way south stopping at average anchorages. The wind had been quite strong making everywhere quite rolly. We were with the rally group of a dozen or so boats.   One of the original stops had been the island of Lankayan but we had been told by one of the cruisers that it was expensive because they were charging for anchoring, snorkelling and even to walk on the beach and to give it a wide berth. Wednesday 9th July we decided to head south with our friends on Jackster, an Amel, who soon disappeared over the horizon. The original plan had been to sail as far as the Turtle islands but the wind had been very fickle and we realised we couldn’t catch Jackster up and wouldn’t make Turtle island before nightfall. As we were passing Lankayan I contacted them to see if one of their buoys was available, luckily all three were. It was very hard to spot because it didn’t have a buoy attached to it just the line lying in the water.   Luckily the resort sent one of their little boats out to show us where it was.

The lodges on the beachfront

For those coming behind us the waypoint for the buoy is

it’s the nearest one to the resort the other two are just behind it. The resort listens to VHF16. It was only 3pm so we decided to go ashore and see how much they were going to charge us. It turned out they didn’t charge for their buoys or even to anchor they just charge MYR25 (£5) per person per day conservation charge. For that you can tie up to their jetty, snorkel their beautiful coral round in front of the resort, walk on the beach, and do what you like. 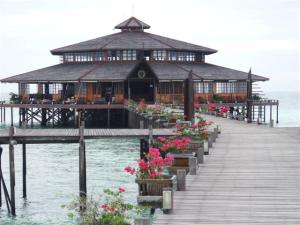 Looking out to the restaurant built over the water

So we were glad we stopped, it was a beautiful spot. The island was very small and could easily be walked in less than an hour.   Interestingly all around the seaward side were manned machine gun posts. There has been a lot of trouble recently with the Filipinos coming over and bothering the tourists. We don’t think any one has been harmed but they didn’t seem to want to take any chances.

Looking from the restaurant back to the island

The next day we decided to get in the water.   We had two snorkels that day. We took the dinghy to the jetty and just swam off of it and the second one was further out which needed the dinghy. 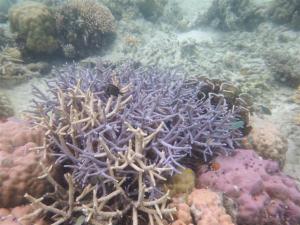 We found an amazing amount of the most superb coral, some of the best we’ve seen since Fiji, and in wonderful colours.   The water clarity wasn’t as good as Fiji but the coral was beautiful. Further out was even better away from the tourist area. 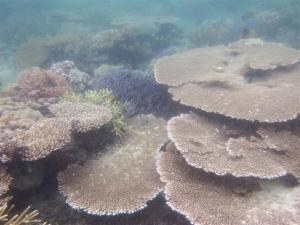 Each one of these plate corals is the size of a dining table.

We saw several of these blue starfish 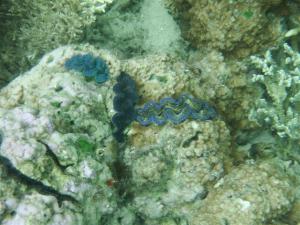 Blue clams embedded in the rock

And the most remarkable clams of vibrant blues 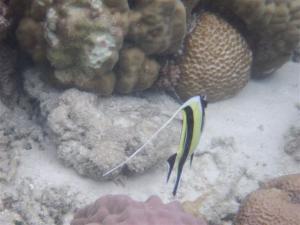 So many fish of all sorts. Angel fish, parrot fish, sergeant majors, 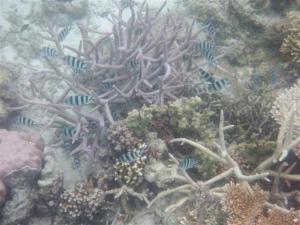 Little white fish under the jetty 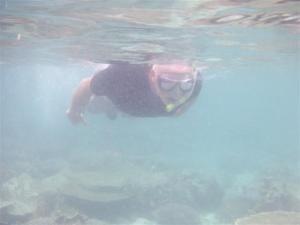 And a big Billum fish.

So it just goes to show you should always see these places for yourself and don’t be put off by other people’s comments.