The yachts in Russian bay

This is the same blog but I’ve added the photos

After a great dive with the divemaster at Sakatia lodge on Monday 12th September, Norsa and Camomile along with Tintin and Solstice sailed across to Russian bay on Tuesday 13th . 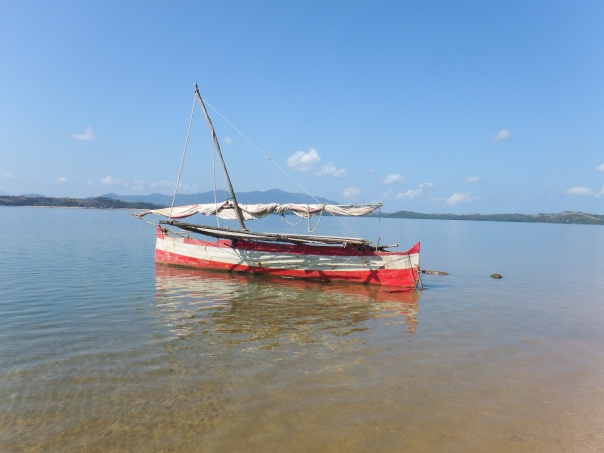 Bill helped me in then climbed the ladder too.

While there a group of us went for a sail with a local guy called Paul in his traditional dhow to the other side of the bay for a wonderful walk. 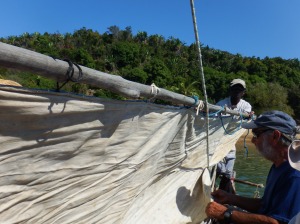 Then raised his sail 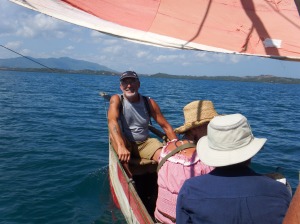 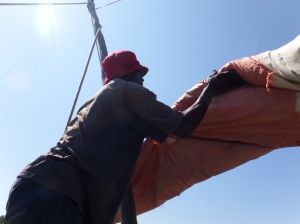 After about an hour the sail was taken down, wrapped up and Paul paddled the last bit

While we went for our walk the dhow just sat waiting for us with a large rock as an anchor. 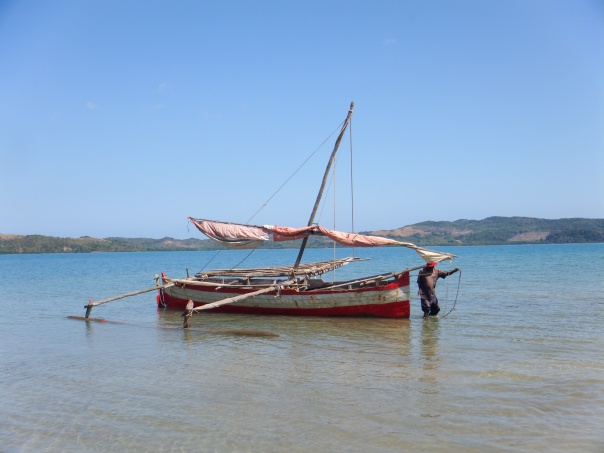 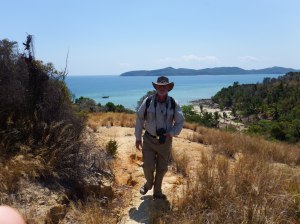 We continued on up the hill 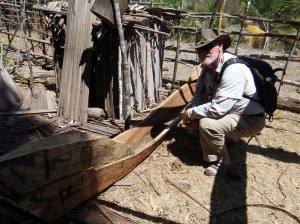 Ug and Ugg offered to get some coconuts for us

so we followed them

A collection of feet. We all just perched on the side and across the branches laid across the outrigger. 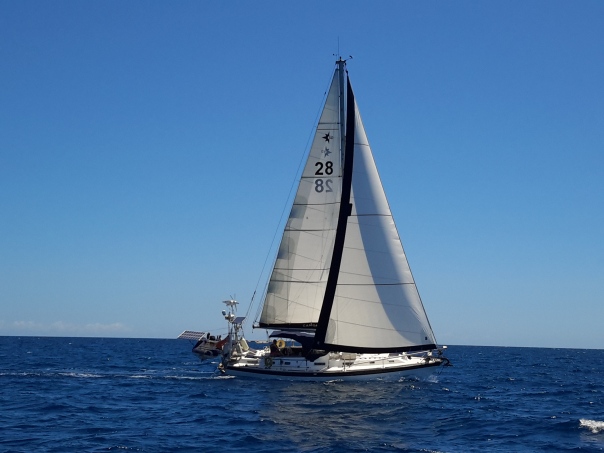 On the Saturday Camomile and Norsa sailed to Nosy Komba for Norman and Sara to see the little village there. Sara and I went up into the lemur forest to see the lemurs again.
Sunday we headed back to Hellville to meet up with Solstice and Tintin ready for our day trip around the island of nosy Be.
Monday 19th saw the 8 of us going ashore and getting into a reasonable 10 seater minibus with air-conditioning for our day trip. It had been arranged through Roland, the guy who runs the chandlery in Crater bay. 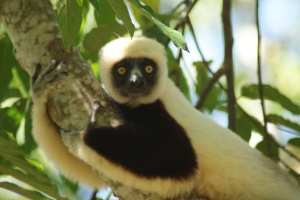 First we went to Lemuria land where we saw several types of Lemur such as ring tailed lemurs, crowned, and black and white ruffed lemurs. 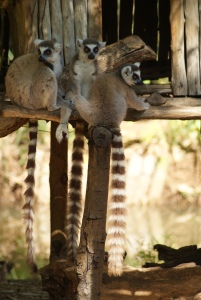 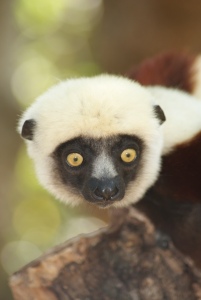 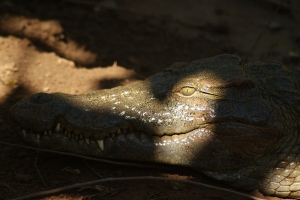 There were also crocodiles, chameleons, iguanas, tortoises, to name but a few. 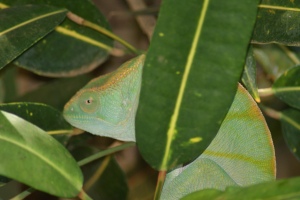 The girls waiting to have their bags weighed

The group continued on to the ylang ylang distillery where girls had picked sacks full of the flowers to be weighed and registered to their name. They are expected to pick in the region of 20kgs a day, which is a lot of flowers, and they would be paid the princely sum of the equivalent of $5! It would take them most of the day to do this so very low wages. The flowers are distilled into essential oils and of course there was the obligatory shop where we were offered a juice and some little tidbits while we looked around. The prices were very reasonable so I treated myself to a few things.

A 20kg bag of petals

The group covered up to visit the sacred tree

Back on the bus and on to the ancient sacred banyan tree. It was necessary to be covered for the visit and we were all ceremoniously wrapped in sarongs before we could enter the grounds. The tree covered a vast area, it was difficult to find the original trunk. Many of the branches had sent out shoots which hang down towards the ground and take root forming branches of their own. It was eerily quiet as we walked around the path in between the many branches with our guide.
After that we drove north to see more of the island before stopping for lunch at the north of the island in the tourist area which also had tourist prices. 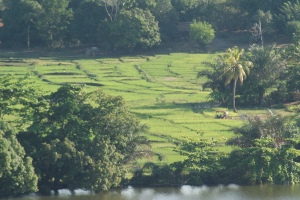 Looking down on the rice paddy fields

The last item on our itinerary for the day was Mont Passot, the islands highest point. On the way up we passed a series of deep blue crater lakes said to be the homes of the spirits of the Sakalava and Antakrana princes and some rice paddy fields. We stopped to take photos but sadly the area had been taken over by tourist stalls.
Continuing to the summit of 326m which gave us the most amazing views. The last section was walked and led to a series of platforms so that you could get clear views in all directions. (Although the photos didn’t come out very clear) There was a bit of an afternoon heat haze but it was possible to see all the way north to Nosy Mitsio and south west to Russian bay and beyond. Stunning views.
During the drive back our guide was able to give us lots of information about the Malagasy people, it was a great day out. The average life expectancy is 62 for men and 65 for women. 1 in 5 children die before the age of 5. There’s no welfare state and school in not compulsory. Many families can’t afford to send their children to school and there’s a 35% illiteracy rate. It was a interesting day.
The whole trip for 8 of us including the van and driver, English speaking guide, and entrances fees but not the lunch cost 210 euros which was 53E per couple plus some tips which we all agreed was good value. Roland’s details are adventuretoursmada@yahoo.com (photos for all this when we get to south Africa)
Bill and I spent Tuesday getting fuel and provisions enough to last us to south Africa because there wouldn’t be any where else to stock up further down the coast. On Wednesday 21st we checked out. The options are domestic check out in Hellville then full check out in Mahajanga or full check out in Hellville. We chose the latter mostly because a lot has been said about Mahajanga, some of which may or may not be true, but mostly because we didn’t want to HAVE to go in if we had a good window to keep going. (Later Adina checked out in Mahajanga and had no problems.) 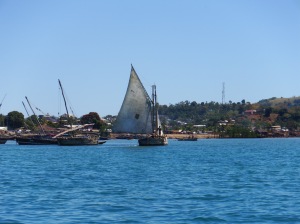 In the afternoon we left Hellville for the last time and sailed back to Russian bay. Our anchorage there was 13 32.19S
047 59.95Ein 14.4M of water. Good holding over sand.
Russian bay is named as such because in 1905 during the Russo – Japanese war a Russian fleet spent nine weeks harboured there. The crew of one of the ships are buried in the cemetery up behind Hellville. A beautiful and remote place opposite Nosy Be the bay provides excellent, all-round shelter. One morning Bill and I took the dinghy for a ride around the bay and were amazed by the bird life in the trees. Just outside the entrance is a beautiful beach which we sat on for an hour or so and swam in the sea. (Camera had another wobble and lost photos) We stayed there for the rest of the week and by the weekend there were 34 boats anchored in the bay because there was a regatta that weekend. Everyone had a great evening on the saturday and Andre worked hard putting on a bbq. The party continued Sunday morning as Andre was selling scrambled eggs and fresh bread with jam and coffee. I passed on the coffee but the bread was nice. There were games organised on the beach and then at midday a dozen or so of the yachts took part in a race back to Crater bay. The following day we started our passage south.

Dinghies on the beach in Russian bay