Into the Bay of Plenty and onto Tuhua (aka Mayor Island)

The radio was handing out strong wind warnings and telling us to keep a sharp look out for containers spilt from the wreck of Rena which struck a well charted reef some 45 odd miles further into the bay doing 17 knots on what turned out to be the captain’s birthday. 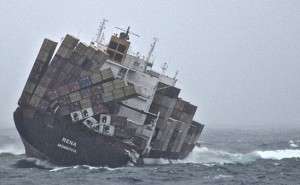 Hmmm should be interesting to see what the board of enquiry makes of that one.

Our Position on 27th January

Meantime the sky was grumpy as we set off from Tairua and the wind was whipping over our decks at 20 knots plus which made for a great downwind romp toMayor Island. I put the full cockpit cover up despite it making sail handling difficult because I really didn’t fancy a soaking in one of the squally downpours which were sporadically marching black and angry across our path. Bless the New Zealand summer.

Like most places hereaboutsMayorIslandis the proud owner of several names. The Mayor name was donated by Captain Cook when he sited it around Lord Mayors Day but it is also named 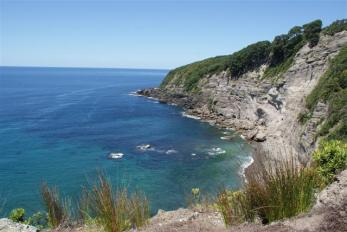 Opuahau on the chart of the area and yet when you arrive there the local warden knows it only as Tuhua. Frankly I think it’s all a cunning scheme to confuse Pommy yachtsmen. It certainly works on me.

Whatever it is called it had an imposing presence as we approached it in the half light of a torrential downpour. The island is quite steep along its coast and rises to 355 metres above sea level. It is believed to have risen from the sea about 7000 years ago but the most recent lava flows have been dated at between 500 and 1,000 years old which, slightly disturbingly, makes it merely dormant rather than extinct. 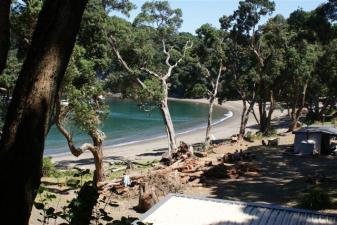 We turned into South East bay, the only permitted landing point on this protected private island and found that the there were only two other boats there. These looked like commercial fishermen taking a rest while their nearby recently placed crayfish pots filled. Good, we might get the place to ourselves. This turned out to be completely wrong as we did not consider that some misguided Kiwi politician had decided to make a public holiday out of the founding of nearbyAuckland. Yes we had arrived on Friday preceding a Monday bank holiday and yes we had company with up to 29 other boats cramming themselves into this tiny bay for the coming three days. I have to say that it was just likeBrittanyin August except that the Kiwi’s seem to know how to anchor in a tight spot without swinging annoyingly close. But then the sun came out so we didn’t care, we just enjoyed the crystal clear water of the sandy bay dappled by sunlight shining through trees hanging from the surrounding cliffs. 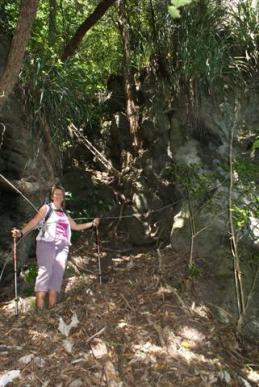 There are walking tracks all over the island and the Maori warden was really helpful in advising us what level to go for once we had been through quarantine. Yes quarantine, they take pests seriously here as they have gone to a lot of trouble to clear out all the rats, cats, pigs etc. and really don’t want to do it again. You did get the feeling though that the rite of entering the quarantine room and having the door closed behind you also implied that this was a border control into Maori territory. It is highly likely that this was not designed exclusively to wind up white Kiwis (Pākehā as they are known to Maori) but some of them certainly don’t think much of it or the $5 landing charge. They were what is best described as vocal about their opinion. Once the warden had satisfied himself that I did not have any pigs or itinerant rodents in my backpack we decided to walk up to the rim and then down into the crater where there are two small lakes imaginatively called GreenLake and BlackLake. 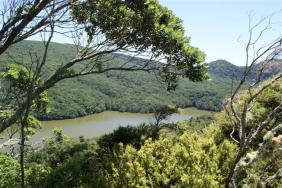 Coluld this be Green Lake?

This is because one is green and one is black. Do you think if they were not so busy giving three names to everything else they could have found something more interesting to call those lakes?The walking track was well marked but is what they call a “bush standard” inNew Zealand. This does not translate into Pom because our health and safety culture would not allow it to exist and even if it did no one would admit ownership of it in case some genius decided to sue them for straining a hair follicle while walking it. I find there is something really refreshing about walking tracks with steep gradients, tree roots sticking out everywhere, wasp’s nests on the path and cliff tracks you have to nearly abseil down using knotted rope lines. I suppose it is because you have to put real effort in and focus on what you are doing rather than shuffling along with a bovine gait in a semi coma induced by the lack of any interest because someone of infinite wisdom has removed from the path every conceivable obstacle or danger. Apart from dying of boredom that is.

The foliage on the slopes is dense so although it was a hot day the overhead cover provided a cool and pleasant environment for our trek even when the going got tough descending into the crater. There were trees all the way down to the lakes at 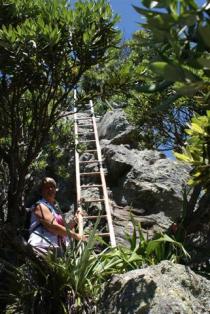 Cheers to DOC for the ladder

the bottom which were lined with all manner of vegetation but we were completely mystified by a noise sounding something like a herd of agitated cattle. We knew that this was impossible because we had both narrowly escaped breaking limbs getting down here therefore there was no chance of livestock making it. The mystery was solved by a botanist who happened to be walking the path when she explained that the lakes were full of frogs calling their mates.
The climb back out of the crater was easy until we got to the “Devils Staircase”. This was a steep assent along a very narrow ridge with a few chains and lengths of wire to steady you from the hundreds of feet sheer drop on both sides. In fairness though, they had planted a nice ladder on the really impassible bit. 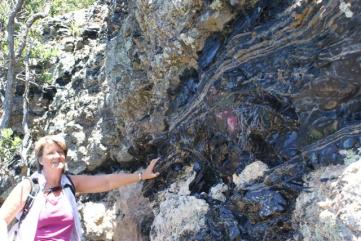 Near this same part of the route we came across a huge vein of shiny black rock. This brittle substance is a volcanic glass called obsidian and is created by the rapid cooling of silica-rich lava. In ancient times it was highly prized by Maori as a cutting tool and called Tuhua from where the island gets one of its names. The spot we had come across was an ancient Maori quarry though there were many places along the track where we had seen this interesting material just lying on the ground or protruding from eroded rock faces. 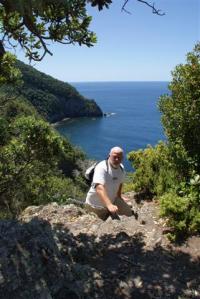 Top of the Devils Staircase

Sue and I were really pleased with ourselves when we emerged at the top of the “Devils Staircase”, it was not so long ago when neither of us would have been fit enough to do it and by the time we got back to the beach we had been walking for four and a half hours which is also pretty good by our standards.

Sunday evening was spent in the pleasant company of Shelly and Wolfgang, from the visiting Botanic Society group. They have an idea that they might like to take up the cruising life one day and wanted to quiz us on our experiences so far and take a closer look at Camomile. It’s always a pleasure to have interested people on board and to have the opportunity to give potential cruisers the best advice we know. Stop making excuses, get on and do it now! 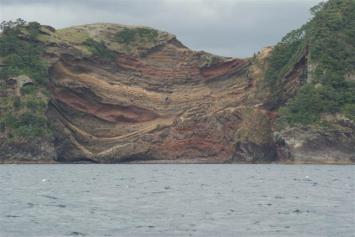 Camomile departed the island via the north to admire its spectacularly diverse coastal cliffs plunging from the rim of the caldera. The rich strata, veins of obsidian, lava flows, tubes, caves and arches are the island’s geological history written large for all to see. This place is a real jewel and to think that, for a time, it was only valued for its local game fishing.