Vanua Balavu aka Exploring Isles aka Fijian Bay of Islands

We are in the Yasawas having a wonderful time with James and I’m sorry the blog has got behind again.  I wanted to share our photos of Vanua Balavu with you before we move it forward. 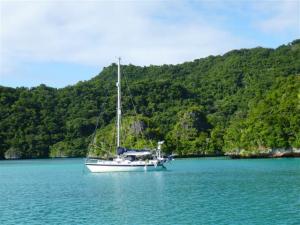 Camomile anchored in the Bay of Islands

We stayed in and around Kadavu for 9 days with mixed weather but always with strong southeast trade winds.  We really wanted to explore the southern Lau islands further south but it would have meant sailing into the wind, which just wasn’t feasible with the present wind strength.  Eventually we decided to abandon that plan and to head straight for Vanua Balavu, which was a 36 hour sail in a northeast direction.  We left on Wednesday 23rd May at 4.00 after setting a snail’s trail on the GPS the day before so we could leave in the dark.

It wasn’t a very pleasant sail although it was a fast beam reach.  The sea was very lumpy and I was sick several times.  Bill didn’t get very much sleep and poor Norsa had another breakage.  A large wave hit their deck and broke the reefing line for the genny therefore releasing the whole sail. Norman battled on deck for an hour trying to wind some of the sail in by hand but decided to wait for daybreak and then release and drop the whole sail.  We stood by while they struggled on deck with it then we both continued to Vanua Balavu.

We arrived together at midday with Camomile leading the way into the reef.

Our position on Thursday 24th May

Vanua Balavu is one of the most beautiful anchorages in the south Pacific.  We discovered it 2 years ago and wanted to return one last time before we leave the Pacific later this year.  The water was a beautiful turquoise colour and the shimmer from the sun is reflected in the limestone undercuts.  We took lots of photos; here are just a few of them. 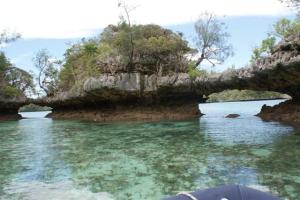 The coral was beautiful too

Little blue fish amongst the coral 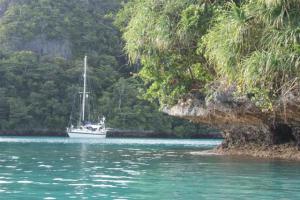 The colour of the water tinted the gel coat turquoise

On Monday 28th May we motored around to the village of Daliconi to do sevu sevu and pay the chef for our stay in the Bay of Islands. We were shown around the village and met some happy ladies making coconut matting.

Bill and Norman chatting to the locals

While walking up to the school Bill and Norman met these lads on their way for lunch.  We didn’t stay in the anchorage because the wind was still blowing strongly and we wanted to get back to the protection of the Bay of Islands. 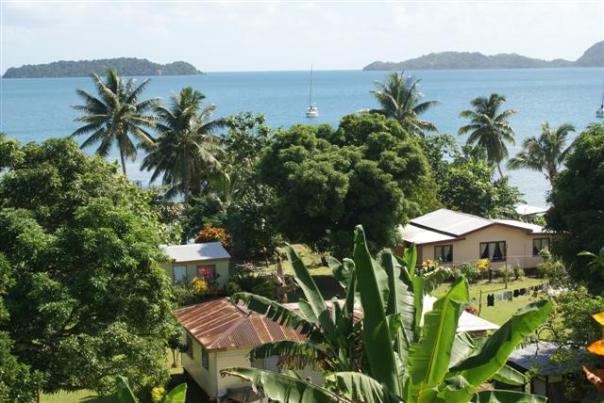 Camomile anchored off of the village of Daliconi 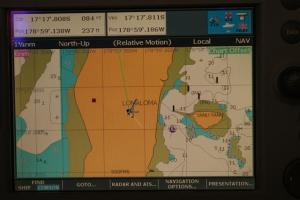 The chartplotter out by about a mile

On Tuesday we sailed around to Lomaloma for supplies.  The chartplotter is all over the place here and can’t be trusted.  This shows the screen with Camomile sitting in the middle of the island instead of by the mauve symbol, which was our actual position.

Camomile and Norsa tied to the buoy

The anchorage was a bit exposed so the next day we motored into Bavatu harbour, another beautiful south Pacific anchorage being surrounded by turquoise water and coral reefs around the edge. There was a large buoy just inside and we managed to tie Norsa and Camomile to it together.

The village on the hill

After landing at the far end and walking to the top of the hill we found a lovely village surrounded by beautiful forest which, after walking for a mile or two, led to a stunning outlook over the Bay of Islands.

Bill and Sue on the steps

We walked back to the other end and found a flight of steps that led back down to the harbour.  We stayed to the end of the week before heading back towards Taveuni. 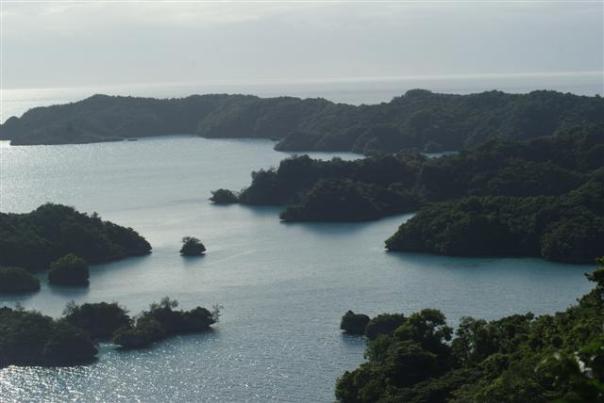 Our last view of the beautiful Bay of Islands