The northern atolls are the least developed regions of the Maldives and are almost unknown to foreigners.  The traditional Maldivian life is virtually untouched.  The Ihavandhippolhu atoll is generally known as Haa Alifu atoll, possibly because of it’s unpronounceable name.  The island of Uligamu, where we checked in, is right at the top of Haa Alifu. 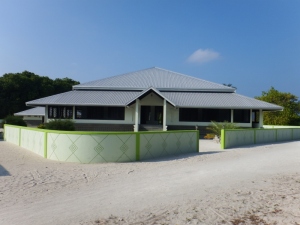 Sunday 6th March was Mother’s day in the UK and I was feeling sad because I couldn’t spend it with our sons so we went for a walk around the island instead.  Having walked around the village several times now we knew our way around.  This is their lovely mosque on the waterfront that has been recently built.  We walked past and through the village to the jungle edge and kept going across the middle of the island to the beach on the other side.  It’s only a 20 minute walk. There was quite a small beach but we headed south and started walking around the island. 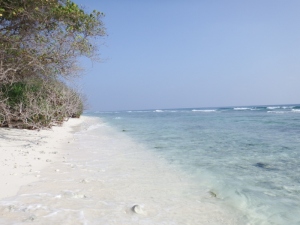 The beach on the other side of the island 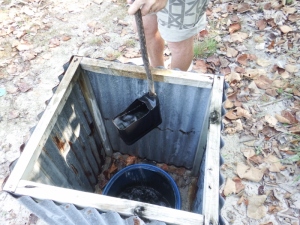 The beach became rocky and difficult to pass so we walked back into the jungle.  Bill discovered this well by the path.  Most of the islands have a fresh water table running under them and this well had been dug to access the water.  Not sure I would drink from it. 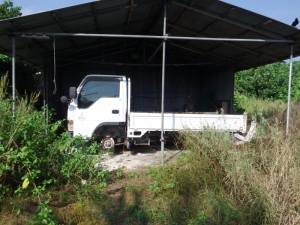 The only vehicle on the island

There aren’t any vehicles on the island but we discovered this old truck a bit worse for wear.  Needs a new set of tyres to start with.

This crazy hermit crab is using an old aerosol top as a shell. 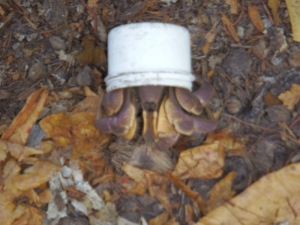 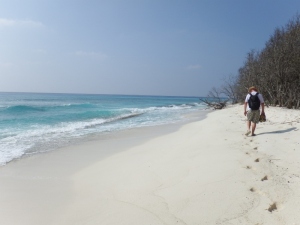 Only our foot prints

Eventually we got back onto the beach.  The sand was so soft under our feet; our footprints were the only ones on the beach. 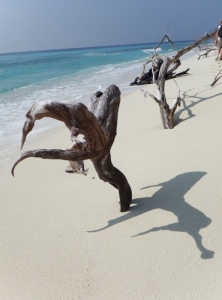 The driftwood was amazing. Thinking of you Claire Fox, you would love this beach. 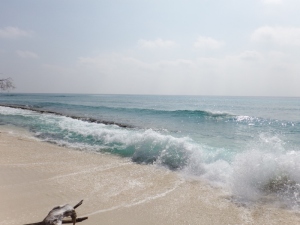 The waves were mesmerising as they crashed over a hard edge of coral all along the beach. Not so good for swimming but wonderful to watch.

Eventually we came to the southern tip which formed a sand bar.  Such beauty. 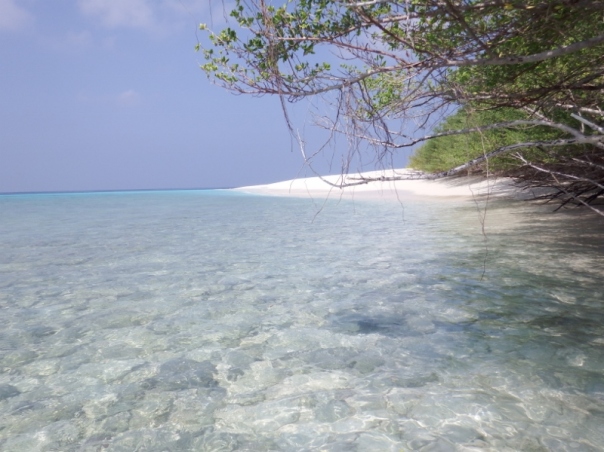 The sandbar on the southern tip of the island of Uligamu 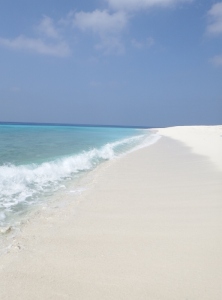 The beach on the eastern side of the sandbar 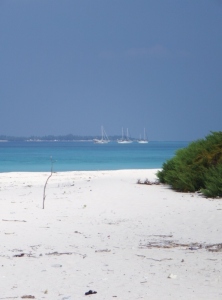 The view on the western side looking across to the yachts 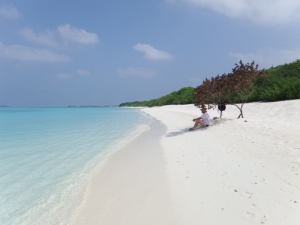 The western side of the island was calmer being away from the swells coming in from the Indian ocean.  Bill managed to find a tree to sit under……. 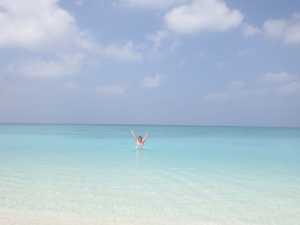 “I’m in the Maldives” 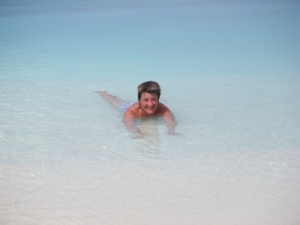 ….. while I played in the beautiful warm azure sea. 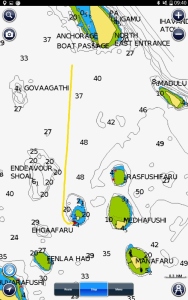 A screenshot of our route on the Navionics APP

Monday 7th I did some writing and we stayed on the boats waiting for the grocery delivery from an island further south.  I had ordered some bread and wasn’t sure what would turn up but some very nice fresh brown bread arrived in the afternoon.  Happy Birthday to my sister Amanda today.

Tuesday 8th was the day we decided to leave Uligamu.  After having been there for 5 days it was time to move on.

We didn’t go far just 5 miles south to the island of Govvaafushi. 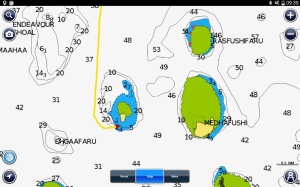 The yellow line is our route

We gradually crept in until it was shallow enough to anchor.  It was still inside the Ihavandhippolhu atoll.

The yellow line is our track. 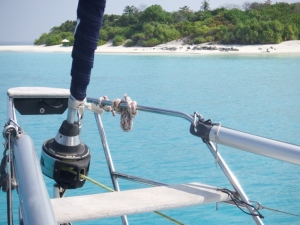 This was our view 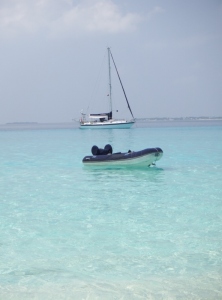 Camomile anchored off the island

The island belongs to the Waldorf Astoria whose resort, which is the most northerly resort in the Maldives, is on the next island.  We went ashore and discovered the most romantic hideaway hidden in the sand dunes.  I took a video but failed to take any pictures – how silly of me! Any way there was a little hut with a table and 2 chairs on the patio with an outside shower room behind it.  Next to it was a circular outside bed surrounded with mosquito netting. As it’s US$1300 a night on the main island goodness knows how much the ‘Castaway island’ experience would cost but it looked beautiful. I’ll post the video on facebook. 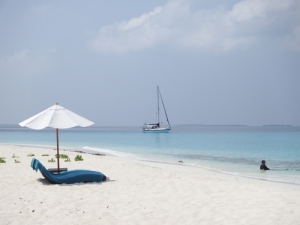 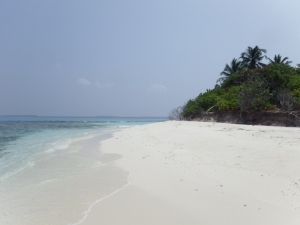 The island was very small and you could walk around it in about half an hour but what an amazing half hour. The beach was stunning. 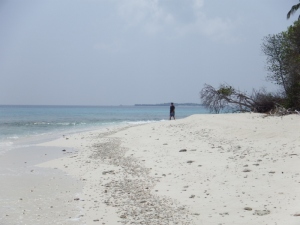 Who is this walking around the island? 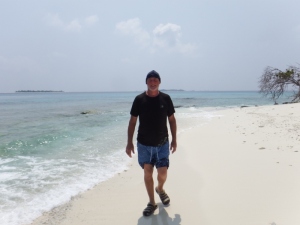 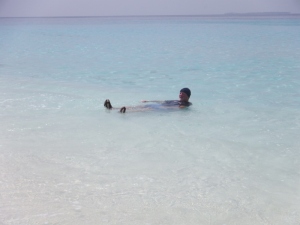 We spent the morning just relaxing and swimming in the warm waters before going back to the boat.

In the afternoon a resort boat turned up with 2 island workers followed by another boat 10 minutes later with 2 resort guests.  After serving them with cold drinks on the beach they were left on the island to enjoy lunch and a swim .  They only stayed a couple of hours, I wonder how much it cost them. 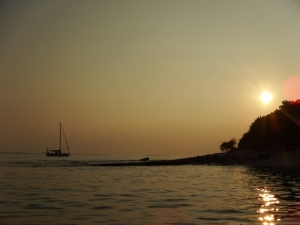 Sunset on the beach

After the guests were taken off the island the resort staff returned and cleared everything away, mattress, mosquito netting, picnic, towels, even the shower gel. The spoil sports even turned the water off because I was going to have a shower.  We had our sundowners on the beach and watched the sun go down.