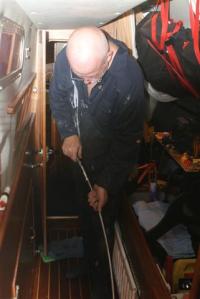 Bill working in his workshop

On 1st March we checked into Opua marina.  Bill had a number of jobs to do including replacing the standing rigging and sorting out a nasty noise coming from the steering binacle.  It would be easier working on these in the marina plus we wanted to leave Camomile in Opua while we hired a car and took a roadtrip around North island.   The steering turned out to be something quite simple but the rigging took twice as long as it should have because it wouldn’t stop raining.  Bill ended up doing a lot of the work inside which wasn’t easy with great lengths of rigging wire coming down into the boat.

Bill rigged up this clever devise to store the wire while he was working on it.

We’ve had a couple of problems with the rigging and it’s now 7 years old so Bill has replaced it using swageless terminals.  Bill took instruction from a professional rigger but I think I’ll leave him to explain more in his technical article.

Eva with her Daddy, David.

This is Eva and Bill and I along with Kerre and Tony off of Forteleza were invited to her 3rd birthday party.

We met Eva last year in Fiji on the ICA rally and she soon became an adopted grand daughter to everyone.  Sadly her Mummy died but she lives with her daddy David and his partner Rachelle.

Eva with her fantastic birthday cake

The cake was cleverly made.

She’s so adorable, I love being with her. 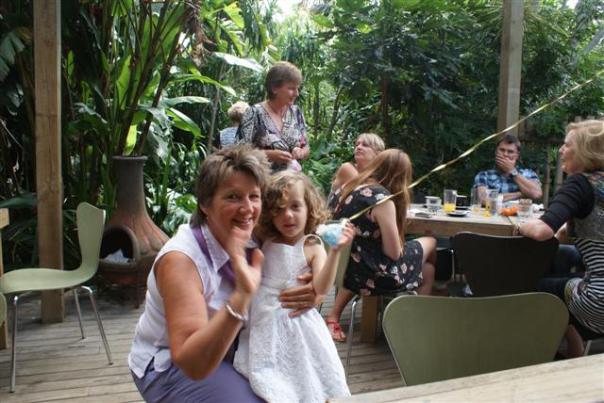