← Napier to Niue – The middle 3 days
Arriving in Tonga →

Napier to Niue – the last part 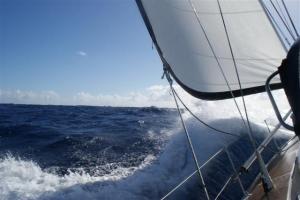 Sailing hard on the wind

We found our first flying fish on the deck this morning a sure sign we’re getting near the tropics. We’ve had easterlies for most of the journey so far but the wind was getting more north in it now. The squalls come from no where, the winds go from 15kts to 30kts to back to 15kts in a short space of time. We are sailing closer and closer to the wind making living more difficult with the heeling of the boat but the sea is now the most beautiful deep indigo blue and it’s 21.6C, warm enough to swin in. We don’t need coats any more and only wear salopettes at night. I spoke to Tim on Kittiwake a Westerly owner on the SSB this evening.

The wind dropped over night and went round on the nose. We motored from 2am until 11.30. We then sailed a bit, motored a bit then sailed a bit more but not really in the right direction. The wind had too much north in it and we were being pushed more and more off our course. We had made quite a bit of easting at the beginning of the journey and were now regretting we hadn’t made more. The rhumb line to Niue was getting harder to follow. When we first left the UK it was ‘To go where the wind takes us.’ Well the wind wasn’t taking us to Niue.

We took the decision this morning to sail to Tonga. The wind was on the nose, the bow was slamming into the waves and it was difficult making any head way; we were going slower and slower. We shook the reefs out, pulled out a full genny, changed course and didn’t look back. We now had our beam reach back again and at last we made some progress. It was disappointing not to be going to Niue but we did go there last year and Tonga was pastures, or seas, new. This morning we also clicked over 20000 miles since leaving the UK 2 years ago, another milestone. Later in the evening we entered lat 23 which is the latitude of the tropic of Capricorn. We were zooming along doing 6kts in 10kts of warm wind; we were back.

Posted on April 27, 2011, in Uncategorized. Bookmark the permalink. Leave a comment.

← Napier to Niue – The middle 3 days
Arriving in Tonga →